Unity is a concept that is of much relevance to our day to day life and helps in achieving goals and objectives that individuals single-handedly cannot. Unity refers to the state of being united or joined as a whole. Imagine if the entire world was fragmented into millions of individuals with no unity amongst themselves? Would mankind have achieved all that it has in the absence of unity? An individual in themselves is bound by several limitations, there are so many things people cannot do by themselves. Yet when these imperfect individuals unite to form a group, so much is achieved, even the unthinkable!

If the entire mankind had indeed been united, the world would have been a much better place. There would be no wars and no violence. Peace would prevail, inequality would cease to exist. The root cause of most the major issues that torment the world is the lack of unity. In order to maintain peace in societies were people of different races, cultures, religions and ethnicities live, there is the concept of Unity in diversity or "unity without uniformity and diversity without fragmentation.”

We have compiled some of the best quotes on unity for you to read and enjoy! 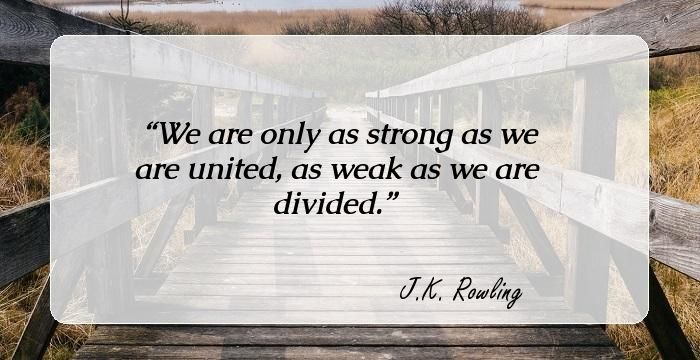 We are only as strong as we are united, as weak as we are divided.

- Harry Potter and the Goblet of Fire, J.K. Rowling 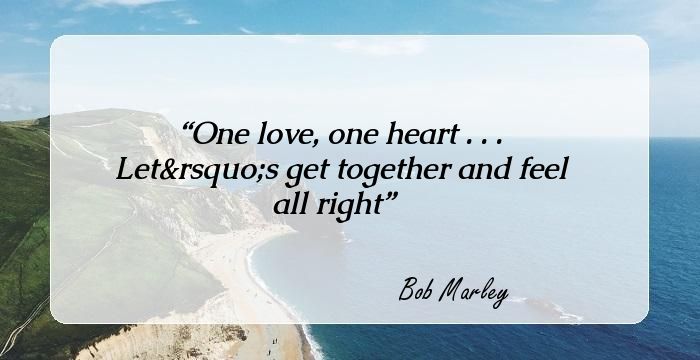 One love, one heart . . . Let's get together and feel all right 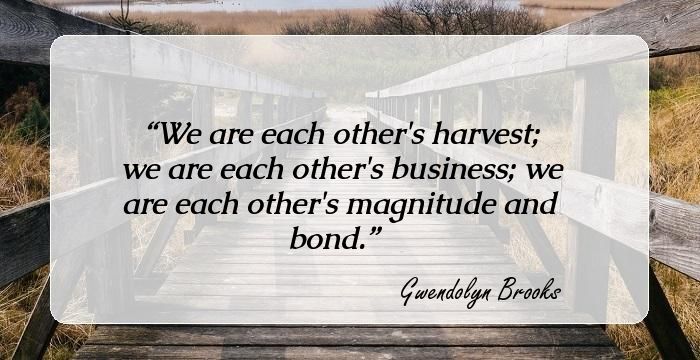 Like a sculptor, if necessary, carve a friend out of stone. Realize that your inner sight is blind and try to see a treasure in everyone. All for one and one for all. John Muir, Earth — planet, Universe [Muir's home address, as inscribed on the inside front cover of his first field journal] When there is no enemy within, the enemies outside cannot hurt you. All for one and one for all, united we stand divided we fall. You are never alone. You are eternally connected with everyone. Pit race against race, religion against religion, prejudice against prejudice. Divide and conquer! We must not let that happen here. The Destiny of Man is to unite, not to divide. If you keep on dividing you end up as a collection of monkeys throwing nuts at each other out of separate trees.

- The Once and Future King, T.H. White The true miracle lies in our eagerness to allow, appreciate, and honor the uniqueness, and freedom of each sentient being to sing the song of their heart. They'll say you are bad or perhaps you are mad or at least you should stay undercover. Your mind must be bare if you would dare to think you can love more than one lover. This is what our love is––a sacred pattern of unbroken unity sewn flawlessly invisible inside all other images, thoughts, smells, and sounds.

- The River of Winged Dreams, Aberjhani If everyone helps to hold up the sky, then one person does not become tired. Each person you meet is an aspect of yourself, clamoring for love. Unity is vision; it must have been part of the process of learning to see. Unity is a beast in itself. If a wolf sees two little boys playing in the woods on one side, and a big strong man on the other, he will go to the one who stands alone. Consider your own place in the universal oneness of which we are all a part, from which we all arise, and to which we all return. I felt knowledge and the unity of the world circulate in me like my own blood. One race, Many cultures, One place. To those Americans whose support I have yet to earn, I may not have won your vote tonight, but I hear your voices. I need your help. And I will be your president, too. This is my country, that is your country; these are the conceptions of narrow souls - to the liberal minded the whole world is a family. To become a true global citizen, one must abandon all notions of 'otherness' and instead embrace 'togetherness'. Individuality or Unity? I say there's room for both. There is enough dough in the world to make bread for us all to eat together. When two brothers are busy fighting, an evil man can easily attack and rob their poor mother. Mankind should always stay united, standing shoulder to shoulder so evil can never cheat and divide them. Heaven means to be one with God.

- Essential Writings of Confucianism: The Analects of Confucius and the Mencius, Confucius