Guru Nanak was the founder of Sikhism and the first of the revered 10 Gurus of Sikhs. Guru Nanak Dev travelled across length and breadth and taught people the message of God. He emphasized that there is only one God who lives in all his creations and that is the ultimate Truth. He built a unique social, spiritual, and political community which was based on the values of fraternal love, equality, goodness, and virtue. The sayings and teachings of Guru Nanak were compiled in the form of 974 poetic hymns in the Guru Granth Sahib, the holy text of Sikhism. Some of the revered prayers of the holy book are the Japji Sahib, the Asa di Var and the Sidh-Ghost. He said that a man should work honesty, share his income, and always remember God and meditate. He founded the Sikh religion based on the ideology that of unity. His teachings work as a guiding force to millions of his followers to this day. Here are some sayings and quotes from his life and teachings. 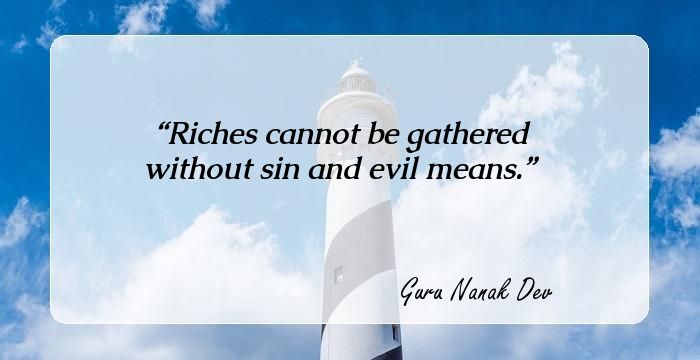 Riches cannot be gathered without sin and evil means. 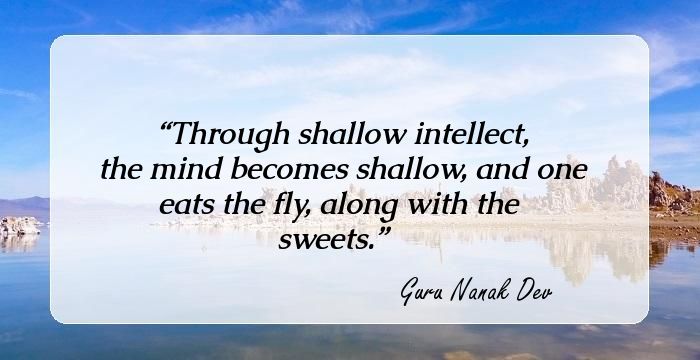 Through shallow intellect, the mind becomes shallow, and one eats the fly, along with the sweets. 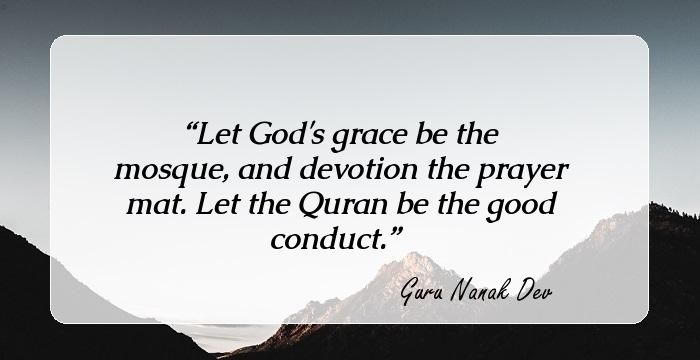 Let God's grace be the mosque, and devotion the prayer mat. Let the Quran be the good conduct. Even Kings and emperors with heaps of wealth and vast dominion cannot compare with an ant filled with the love of God. I am neither a child, a young man, nor an ancient; nor am I of any caste. The production of children, the nurture of those born, and the daily life of men, of these matters woman is visibly the cause. One cannot comprehend Him through reason, even if one reasoned for ages. Let no man in the world live in delusion. Without a Guru none can cross over to the other shore. Alone let him constantly meditate in solitude on that which is salutary for his soul, for he who meditates in solitude attains supreme bliss. Sing the songs of joy to the Lord, serve the Name of the Lord, and become the servant of His servants. Whatever kind of seed is sown in a field, prepared in due season, a plant of that same kind, marked with the peculiar qualities of the seed, springs up in it. I bow at His Feet constantly, and pray to Him, the Guru, the True Guru, has shown me the Way. I am not the born; how can there be either birth or death for me? By singing the Guru's hymns, I, the minstrel spread the Lord's glory. Nanak, by praising the True Name, I have obtained the perfect Lord. From its brilliancy everything is illuminated. Whatever be the qualities of the man with whom a woman is united according to the law, such qualities even she assumes, like a river, united with the ocean. Offspring, the due performance on religious rites, faithful service, highest conjugal happiness and heavenly bliss for the ancestors and oneself, depend on one's wife alone. That one plant should be sown and another be produced cannot happen; whatever seed is sown, a plant of that kind even comes forth.