17 Top Quotes By Shah Rukh Khan To Get You Inspired

Shah Rukh Khan is an Indian film star, renowned for enacting romantic roles in Bollywood. In his childhood and youth, Shah Rukh was involved in sports and theater. He also took part in the rehearsals of the National School of drama. Lekh Tandon’s television soap, ‘Dil Dariya’, was his television project. Later shows like ‘Fauji’, ‘Vhagle ki Dhunya’ and ‘Circus’ earned him fame. He was approached by Hema Malini for the film, ‘Dil Aashna Hai’ and was cast opposite Divya Bharathi. Although it was the first movie he worked in, ‘Deewana’ was his first released film in Bollywood. Shah Rukh stunned the film industry by his role as a villain in the movie Bazigar. His work and passion to projects that he picks as an actor, producer, host or an entrepreneur has set new benchmarks for success. We haveput together a few quotes of this famous superstar!
7 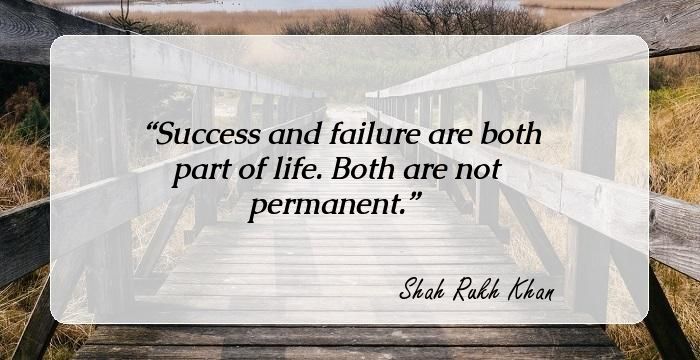 Success and failure are both part of life. Both are not permanent. 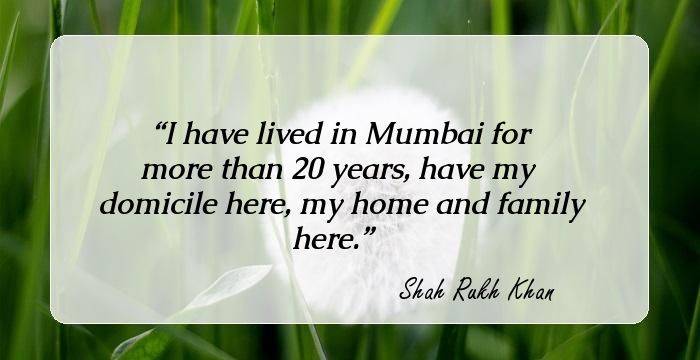 I have lived in Mumbai for more than 20 years, have my domicile here, my home and family here. 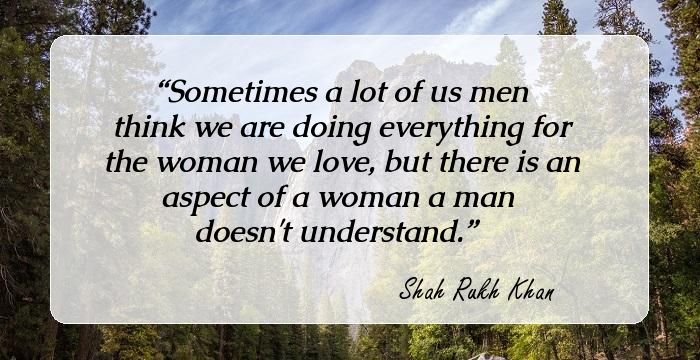 Sometimes a lot of us men think we are doing everything for the woman we love, but there is an aspect of a woman a man doesn't understand. I don't kiss on screen. Period. I truly believe my job is to make sure people smile. Even though I am fantastic looking, I am still quite intelligent. Success is not a good teacher, failure makes you humble. There's a personal me, there's an actor me and there's a star me. I think love can happen at any age... it has no age. I know it's very idealistic and utopian, but I believe we need to just let everyone not be judged in terms of religion, groups or nations or region. The line between what I really am, and what I am on reel, is slowly diminishing. I love being recognized, I love people liking me, I love the fact that people scream when I go out. I think I'll miss all that when it's taken away. When people call me God, I say, no, I'm still an angel or saint of acting. I still have a long way to go. Cinema in India is like brushing your teeth in the morning. You can't escape it. You know, I think we Indians are afraid to show and celebrate our happiness, lest things change around. But I feel that it's okay to be sad and okay to show when you are happy. There is no right time and right place for love... it can happen any time.