Nobel laureate Amartya Sen is well known for his contribution to the development of the concept of Micro Economy.Here are some interesting trivia about the life and works of the eminent economist.

1. Though he was born in Manikganj (a place in modern-day Bangladesh) he grew up in the campus of Viswa Bharati University, Shantiniketan, West Bengal.

2. His mother was a part of Rabindranath Tagore's dance-drama troupe and it is said that Gurudev himself christened the young boy.

3. The Bengal Famine of 1943 left a lasting impression on the mind of Sen. The poverty, and dilapidated state of the people inspired him to work towards upliftment of poor. The concept of Micro Economy which he developed along with Muhammad Yunus was aimed at 'improving the well-being of the least advantaged members even in impoverished societies.'

4. When he was offered a Prize Fellowship at Trinity College, Sen chose the discipline of Philiosophy as he wanted to study the works of great philosophers and scholars like Karl marx, Adam Smith and G. B. Shaw.

5. Sen is a champion of gender equality; in his papers one can notice the use of she/her more than he/him. 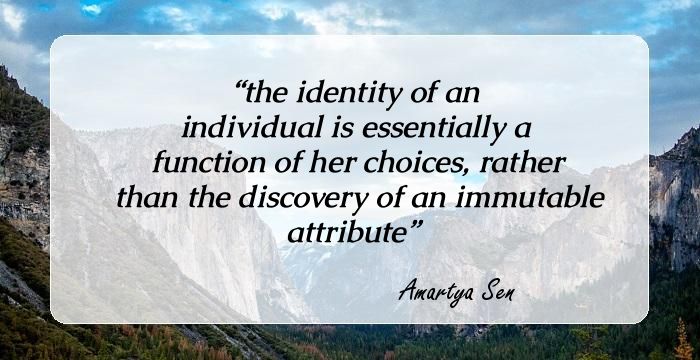 The identity of an individual is essentially a function of her choices, rather than the discovery of an immutable attribute 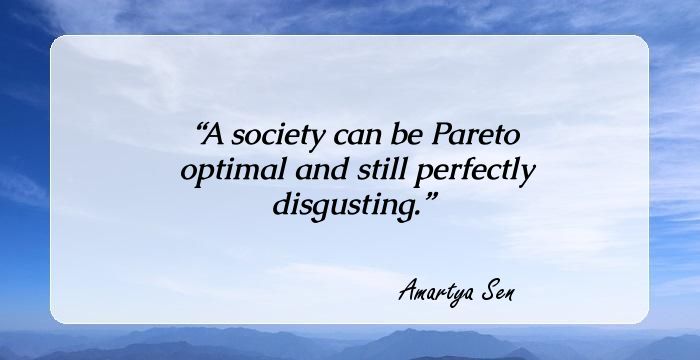 A society can be Pareto optimal and still perfectly disgusting. 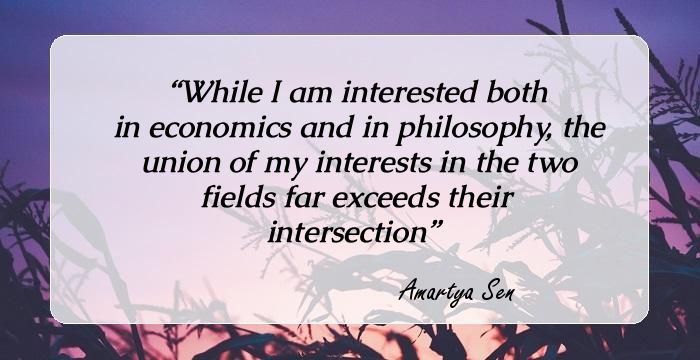 While I am interested both in economics and in philosophy, the union of my interests in the two fields far exceeds their intersection A defeated argument that refuses to be obliterated can remain very alive. Unceasing change turns the wheel of life, and so reality is shown in all it's many forms. Dwell peacefully as change itself liberates all suffering sentient beings and brings them great joy. Resenting the obtuseness of others is not good ground for shooting oneself in the foot. If a theory of justice is to guide reasoned choice of policies, strategies or institutions, then the identification of fully just social arrangements is neither necessary nor sufficient.

- The Idea Of Justice, Amartya Sen Nor let us be resentful when others differ from us. For all men have hearts, and each heart has its own leanings. Their right is our wrong, and our right is their wrong. Prolixity is not alien to us in India. We are able to talk at some length. - Identity and Violence: The Illusion of Destiny, Amartya Sen The Affluent Society not only changed the way the country viewed itself, but gave new phrases to the language: Conventional wisdom, the bland leading the bland, private opulence and public squalor. There are two principal approaches to secularism, focusing respectively on (1) neutrality between different religions, and (2) prohibition of religious associations in state activities. On being invited to the Jaipur Festival, I was naturally nervous about attempting an opening address to such an elite gathering.

- A Wish a Day for a Week, Amartya Sen Defeated argument that refuses to be obliterated can remain very alive.