Osho Rajneesh was an Indian spiritual leader who founded the Rajneesh movement. He was viewed as a controversial mystic, guru, and spiritual teacher. He travelled throughout India as a vocal critic of socialism and Mahatma Gandhi in the 1960s and gained popularity. Osho started a cult that had a more open attitude towards Hindu orthodoxy. He spent time in Bombay inducting followers known as "neo-sannyasins". His writings gave an original insight into the writings of religious traditions, mystics, and philosophers from around the world. His teachings led to tensions between the movement and the government. Its development was finally curtailed by the Government in the late 1970s. By 1981, Osho started spreading his teachings and established an ashram for his followers in America. The Ashram, ‘Rajneeshpuram’ in Wasco County, Oregon faced tensions with the county. Osho was accused of a bio-terror attack and an assassination plot to murder US Attorney Charles H, in 1985. As a result of this, his movement was curtailed and he was deported from America. He had been barred entry by many prominent countries, so he ultimately returned to India where he died in his Pune ashram in 1990. His Ashram has been renamed Osho International Meditation Resort, where the importance and techniques of meditation is taught. His teachings on love, celebration, courage, creativity, and humor are also preached at this school. Here is a collection containing his notable quotes. 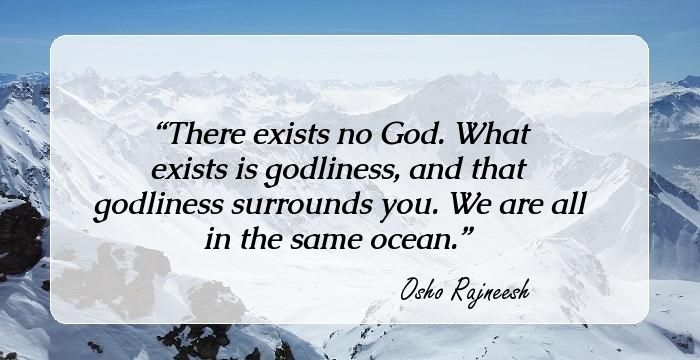 There exists no God. What exists is godliness, and that godliness surrounds you. We are all in the same ocean. 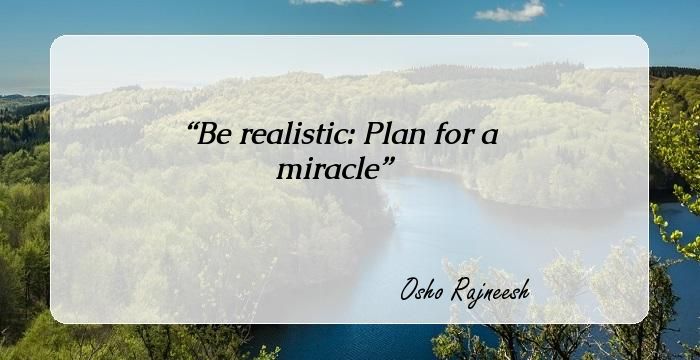 Be realistic: Plan for a miracle 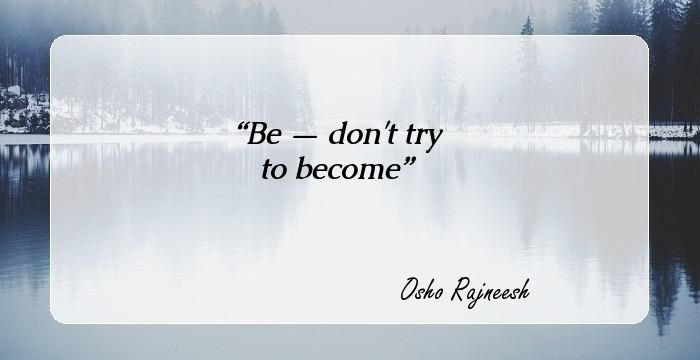 Creativity is the greatest rebellion in existence. Friendship is the purest love. It is the highest form of Love where nothing is asked for, no condition, where one simply enjoys giving. The less people know, the more stubbornly they know it. Courage Is a Love Affair with the Unknown Nobody has the power to take two steps together; you can take only one step at a time. They say: Think twice before you jump. I say: Jump first and then think as much as you want! If you are a parent, open doors to unknown directions to the child so he can explore. Don't make him afraid of the unknown,give him support. Your whole idea about yourself is borrowed-- borrowed from those who have no idea of who they are themselves. Whatever you feel, you become. It is your responsibility. Always remember to judge everything by your inner feeling of bliss. Find ecstasy within yourself. It is not out there. It is in your innermost flowering. The one you are looking for is you. I live my life based on 2 principles. One, I live as if today was my last day on earth. Two, I live today as if I am going to live forever. In love the other is important; in lust you are important One just needs a little alertness to see and find out: Life is really a great cosmic laughter. A certain darkness is needed to see the stars. A little foolishness, enough 2 enjoy life, & a little wisdom to avoid the errors, that will do All that is great cannot be possessed - and that is one of the most foolish things man goes on doing. We want to possess. It is beautiful to be alone, it is also beautiful to to be in love, to be with people. And they are complementary, not contradictory. There is no need of any competition with anybody. U R yourself, and as U R, U R perfectly good. Accept urself Love is the goal, life is the journey. What is discipline? Discipline means creating an order within you. As you are, you are a chaos. No thought, no mind, no choice â€” just being silent, rooted in yourself.