9 Inspirational Quotes By Nobel-Laureate C V Raman That Will Fill You Up With A New-Found Zeal.

Chandrasekhara Venkata Raman was a renowned physicist who won the Nobel Prize for his contribution in understanding the quantum nature of light. The Raman Effect as the phenomenon of scattering of light when it passes through a transparent medium was discovered by the eminent scientist. His discovery made him not only the nations but even the first Asian Nobel-laureate. Here are a few interesting tit-bits from the life of the famous scientist.
Raman was a highly intelligent student and he appeared for his matriculation exams at the age of 11 and even earned a scholarship for F.A., which he cleared at the age of 13.
It was an observation Chandrasekhar made while travelling to the Europe that inspired his research which led to the prize-winning discovery of scattering of light. Raman was curious to find out the reason behind the blue colour of the glaciers and the sea.
The day on which C V Raman made the discovery on quantum nature of light is observed as National Science Day in the country. He was also named as the first National Professor of independent India.
An expert of optics, Raman also dabbled with acoustics. He studied the nature of sound emanating from the rhythm instruments used in Indian music.
Here are a few inspirational quotes by the eminent scientist C. V. Raman himself.
1 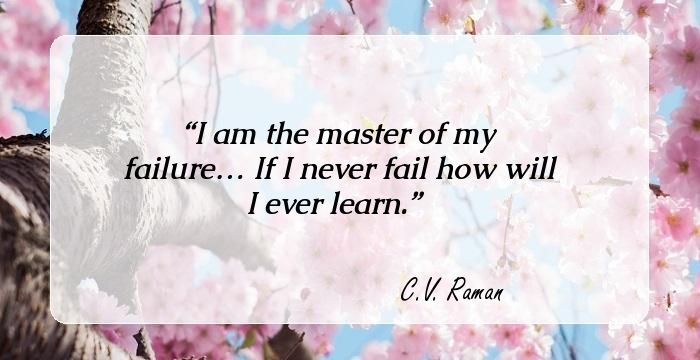 I am the master of my failureâ€¦ If I never fail how will I ever learn. 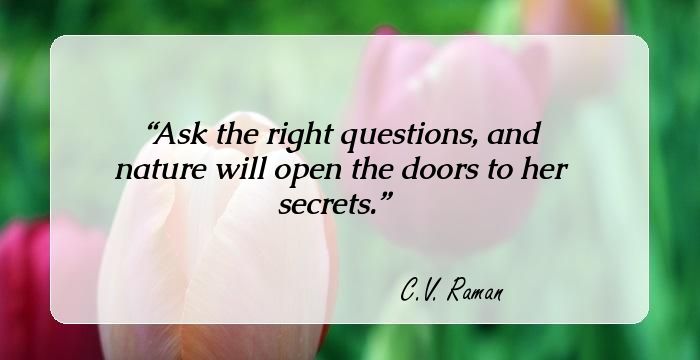 Ask the right questions, and nature will open the doors to her secrets. 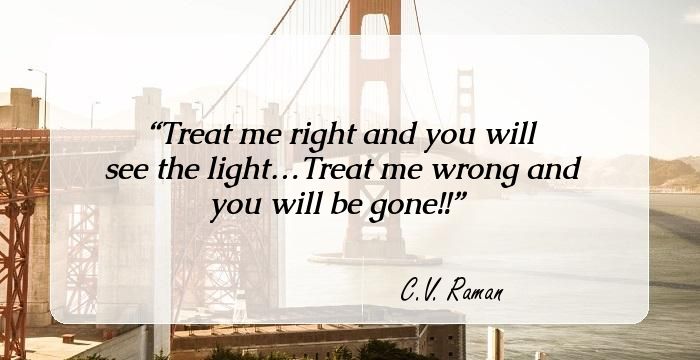 You canâ€™t always choose who comes into your life but you can learn what lesson they teach you. Success can come to you by courageous Devotion to the task lying in front of you. I strongly believe that fundamental science cannot be driven by instructional, industrial and government or military pressures If someone judges you,they are wasting space in their mindâ€¦Best part, itâ€™s their problem. I received my parentsâ€™ permission and went into the Navy on June 3, 1941. The whole edifice of modern physics is built up on the fundamental hypothesis of the atomic or molecular constitution of matter.