20 Motivational Quotes By Venkataraman Ramakrishnan That Reveal The Importance Of Harboring A Scientific Temperament In Life.

Venkataraman Ramakrishnan is an Indian American and British scientist of Indian origin who presides over the Royal Society of London. Ramakrishnan was also awarded with the Nobel Prize for Chemistry in 2009. However when the structural biologist received a call informing him of the news, his reaction was something unexpected.
The caller identified himself as hailing from the Royal Swedish Academy and informed that Venkataraman was named as the winner of Nobel Prize along with Thomas Steitz and Ada Yonath.
The scientist thought it was a prank call and he was insistent at calling the bluff. He recalls, "We have quite a few pranksters in the lab and I thought this was one of them. I even congratulated the man, ironically, on his Swedish accent."
To prove that it was a hoax he wanted the caller, who was Gunnar Oquist, the Royal Swedish Academy's permanent secretary, to put Mans Ehrenberg, a colleague on line. He thought when Ehrenberg would not take the call, the prank would be revealed.
However instead Mans Ehrenberg, took the call and informed Ramakrishnan that he indeed was the winner.
The following are a few quotes by the eminent scientist Venkataraman Ramakrishnan himself.
8 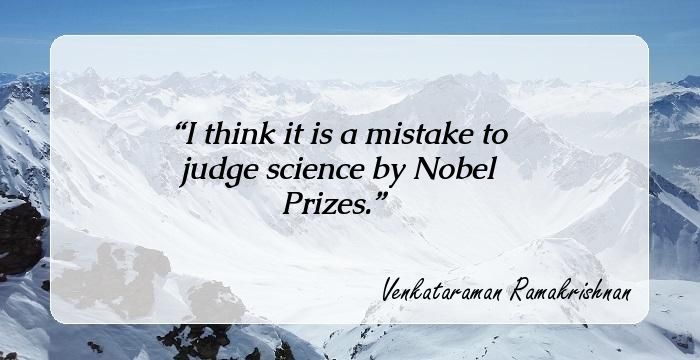 I think it is a mistake to judge science by Nobel Prizes. 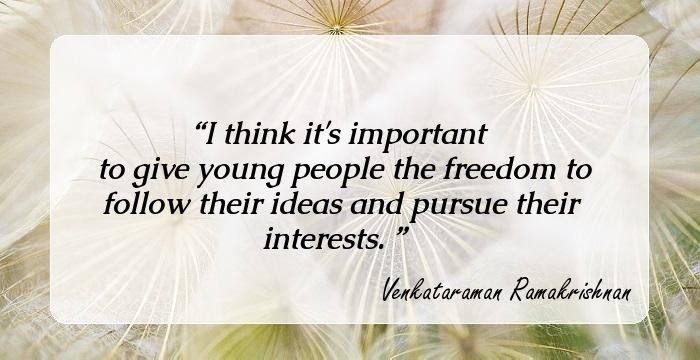 I think it's important to give young people the freedom to follow their ideas and pursue their interests.¬† 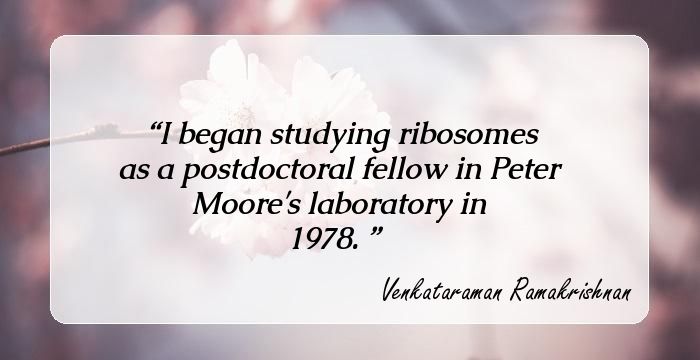 I began studying ribosomes as a postdoctoral fellow in Peter Moore's laboratory in 1978.¬† If I were to take an undergraduate chemistry exam, I would probably fail.¬† There is no room for political, personal or religious ideologies in science.¬† I cannot imagine a more enjoyable place to work than in the Laboratory of Molecular Biology where I work.¬† We are all human beings, and our nationality is simply an accident of birth.¬† We live in an increasingly technological world where the issues are quite complex and based on some complicated science.¬† It's not about where you were born or where you come from that makes you a good scientist. What you need are good teachers, co-students, facilities.¬† I am still the same person doing the same science. Why are people so impressed when some academy in Sweden gives an award?¬† Science is curiosity, testing and experimenting.¬† There is no magical formula for winning a Nobel Prize.¬† You can only go into science because you're interested in it.¬† I was born in 1952 in Chidambaram, an ancient temple town in Tamil Nadu best known for its temple of Nataraja, the lord of dance.¬† Even the best scientists are often insecure and feel the need for recognition.¬† People go into science out of curiosity, not to win awards. But scientists are human and have ambitions.¬† Nobody has approached me about an offer to work in India. However, I can categorically state that if they did so, I would refuse immediately.¬† Science today is a highly collaborative exercise, and to convert it into a contest, as the Nobel does, is a bad way to look at science.¬† Science is an international enterprise where discoveries in one part of the world are useful in other parts.¬† We benefit tremendously from the E.U. Britain does very well in getting back E.U. money for the amount it puts in.¬†