14 Inspirational Quotes By Vikram Sarabhai, The Father Of Indian Space Programme, Who Orchestrated The First Satellite Launch In The Country.

Vikram Ambalal Sarabhai was the man who spearheaded India's space programme. In order to promote all round development in the field of science and technology he helped establish several institutions. The scion of the reputable and philanthropic Sarabhai family of Gujarat, he continued with the tradition of giving back to the society.

Sarabhai's family members were not present at his wedding ceremony as they were active participants of the Quit India Movement.

After the Britishers left the country Sarabhai took the onus of expanding the scientific prowess of the nation. He lobbied funds to establish the Physical Research Laboratory and also initiated the establishment of Indian Space Research Organization.

Sarabhai along with Homi Jehangir Bhabha set up the first rocket launching station in the country. The Father of India's space programme Vikram Sarabhai was also the man who brought television and cable to India.

It was at the behest of Sarabhai’s effort that India joined the club of nations that launched their own satellite. Aryabhatta the first satellite was built by team of scientists led by Sarabhai.

He also helped establish the premier management institute IIM, at Ahmedabad, the second in the country.

These inspirational quotes by the famous scientist and philanthropist Vikram Sarabhai bear testament to the greatness of his personality. 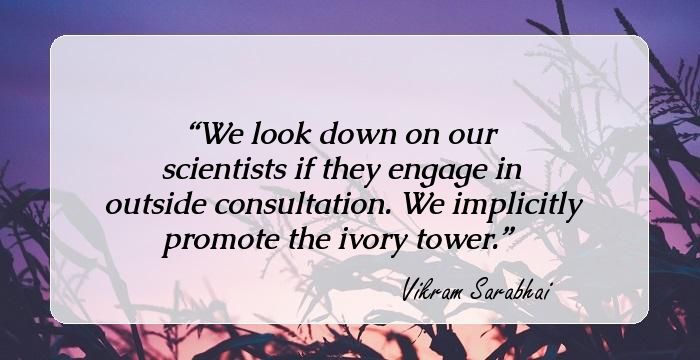 We look down on our scientists if they engage in outside consultation. We implicitly promote the ivory tower. 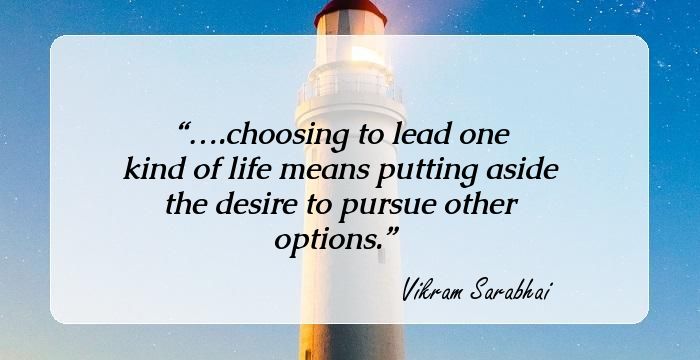 ‚Ä¶.choosing to lead one kind of life means putting aside the desire to pursue other options. 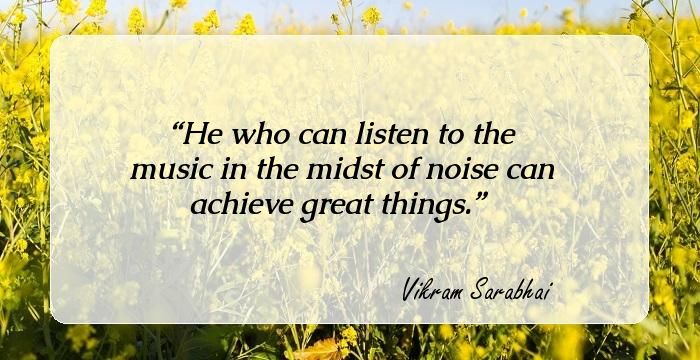 He who can listen to the music in the midst of noise can achieve great things. ‚Ä¶.my friend Vikram Sarabhai who often said to me: When you stand above the crowd, you must be ready to have stones thrown at you. Basic social and economic change needs to brought about gradually and the more carefully and thoughtfully it is effected, the more permanent it will be. The cooperative structure never encourages huge bureaucratic systems, for it knows that mammoth bureaucracies cannot be sensitive to the needs of people. ..with adequate support, confrontation at the right time pays off. One wants permissive individuals who do not have a compelling need to reassure themselves that they are leaders. I have often claimed that I have had but one good idea in my life: that true development is the development of women and men. ‚Ä¶failure is not about not succeeding. Rather it is about not putting in your bet effort and not contributing, however modestly, to the common good. Our belief at Anand has always been: let the people‚Äôs energies be unleashed. Our bureaucracy today is too bloated and therefore it is burdensome.