23 Inspiring Quotes By Indra Nooyi The First Female CEO Of Pepsico That Will Help You Strike A Work-Life Balance.

It was a man's world at PepsiCo but a woman diligently worked her way up the stairs to the boardroom. As she recalls they were in the middle of a big acquisition and she had plans to work late in the night; it had almost become a ritual. But on that fateful day she received a called from the CEO bearing news that she was named the President of the company. It took a moment to sink in; it was one of the biggest days in her life and she decided to take a break from work and celebrate with her family. She reached home and parked her car and as she was climbing the stairs she found her mother waiting. Unable to contain her excitement she eagerly started telling her mother about the good news but was stopped midway by her mother who instead asked her to get a packet of milk as they had ran out of it. She looked around the garage and saw her husband's car parked. Out of curiosity she enquired her mother why she didn't ask him to get the milk. A reply came, "He's tired." She then asked why she didn't ask the hired help only to be met with a futile "I forgot." Unwillingly she went to get the milk. Upon reaching home she banged the packet of milk on the kitchen counter and reprimanded her mother that she was made the president of PepsiCO and all she cared was a packet of milk. Hearing this her mother replied, "let me explain something to you. You might be president of PepsiCo. You might be on the board of directors. But when you enter this house, you're the wife, you're the daughter, you're the daughter-in-law, you're the mother. You're all of that. Nobody else can take that place. So leave that damned crown in the garage. And don't bring it into the house. You know I've never seen that crown."

If you're wondering who this woman is then look no more as she is none other than Indra Nooyi, PepsiCo's first female CEO. Here are a few inspirational quotes by Indra Nooyi. 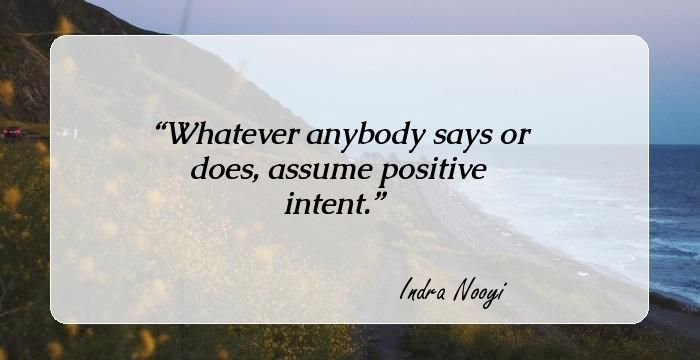 Whatever anybody says or does, assume positive intent. 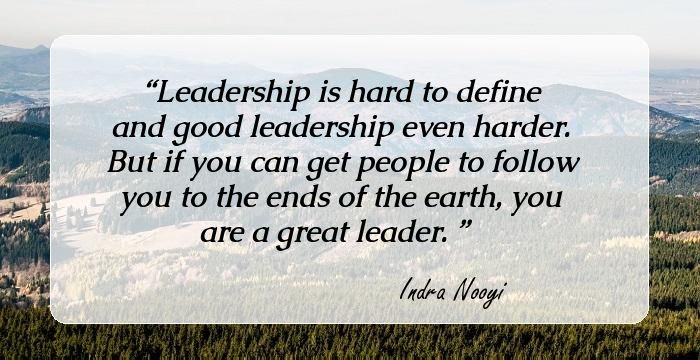 Leadership is hard to define and good leadership even harder. But if you can get people to follow you to the ends of the earth, you are a great leader.Â 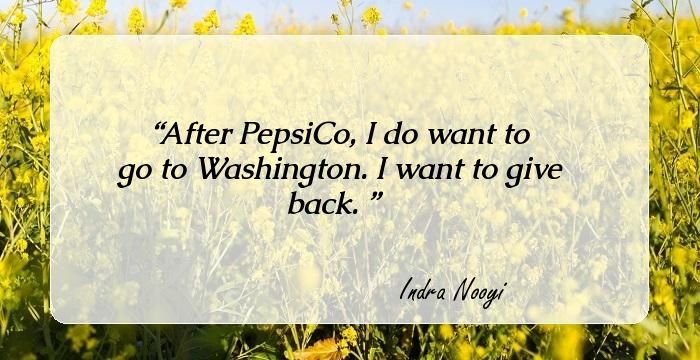 After PepsiCo, I do want to go to Washington. I want to give back.Â An important attribute of success is to be yourself. Never hide what makes you, you. Take a stand. Be known for your courage and confidence. Each and every one of us has unknowingly played a part in the obesity problem.Â Every year in consulting is like three years in the corporate world because you have multiple clients, multiple issues - you grow so much.Â I'm very honest - brutally honest. I always look at things from their point of view as well as mine. And I know when to walk away.Â When I came to America in 1978, I was a huge sports fan - the problem was, my sport was cricket. Shockingly enough, no one wanted to talk cricket with me!Â PepsiCo did not have a woman in the senior ranks, nor a foreign-born person who was willing to think differently.Â I pick up the details that drive the organization insane. But sweating the details is more important than anything else.Â But the good news was that my elder sister refused to get married straight away and I couldn't get married until she did so I had the licence to go off and dream.Â I read every country's perspective on an issue. I also play many games like Bridge, Scrabble and Sudoku online.Â Blogging and the Internet allow us to engage in a lot more real time conversations as opposed to a one-way dump of information or a message.Â The biological clock and the career clock are in total conflict with each other. Not only do we have to change the food we eat... we have to educate people about what they can eat appropriately.Â Is Naked Juice a beverage, or is it a snack? I think we can liquefy snacks or snackify liquids.Â I've been around the bend in corporations.Â Food service is a growth area for PepsiCo.Â