10 Inspiratonal Quotes By Sabeer Bhatia, The Founder Of Hotmail, That Convey The Importance Of Perseverance.

Outlook the email service has become an integral part of our work life. Its usability at workplace is indispensable and it is the second most used email service only after Google's Gmail.
But do you know Outlook is revamped and modified version of one of the earliest email services Hotmail?
Hotmail was the brainchild of Sabeer Bhatia, an Indian origin businessman. Apparently Bhatia conceived the idea of Hotmail when a firewall blocked an email he was sending to his colleague at Apple Inc.
His innovations quickly popularized Hotmail and grabbed the attention of giants like Microsoft which eventually acquired it in a 400 million dollar deal.
Microsoft retained Bhatia when they acquired his company but it was not long before he realized that he was not cut for the life of a regular office-goer.
Ever smitten with the entrepreneurship bug Bhatia dabbled with eCommerce, a concept which was still in the nascent stages. Aarzoo Inc. owned by Bhatia was one of the world's first eCommerce companies.
Sabeer is credited as the founder of free messaging service known as JaxtrSMS.
Here are a few inspirational quotes by the famous entrepreneur and innovator Sabeer Bhatia himself.
5 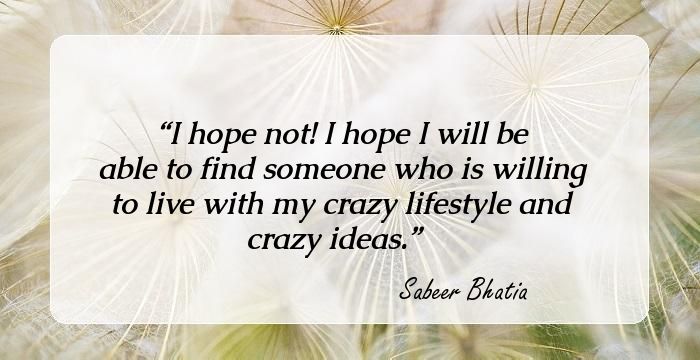 I hope not! I hope I will be able to find someone who is willing to live with my crazy lifestyle and crazy ideas. 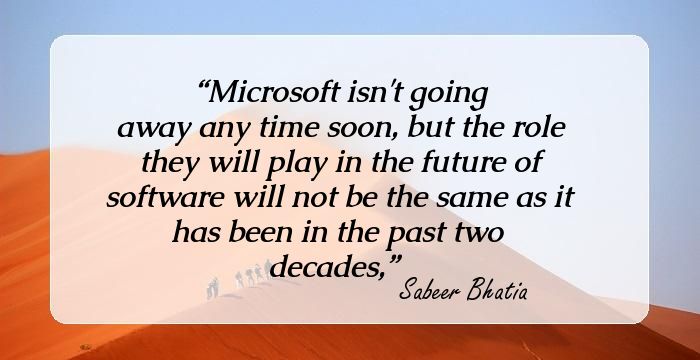 Microsoft isn't going away any time soon, but the role they will play in the future of software will not be the same as it has been in the past two decades, 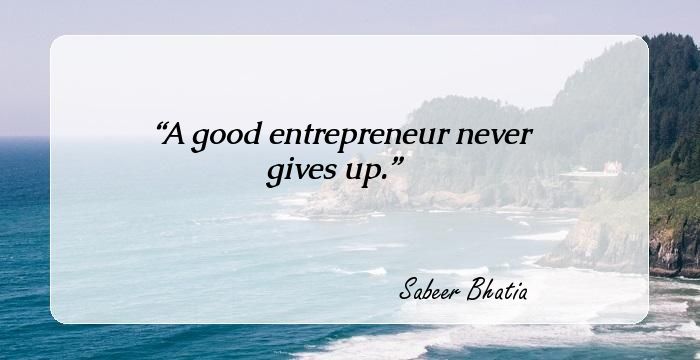 A good entrepreneur never gives up. It solved a real world problem: The killer idea was to make email available on the web, Communication and games make for a sticky application. The entrepreneurial heroes of the Valley are accessible to many people. I was always inquisitive as a child, ... I always knocked on doors to find out what could be possible. I think the soul of an entrepreneur is to keep trying until you find the successful idea. You will be able to make a call from anywhere in the world to a cell or fixed line in India for as low as low as Re 1 per minute. We thank Hotmail for creating such a good space and enabling us to follow.