20 Inspirational Quotes By Vinod Khosla, The Co-Founder Of Sun Microsystems, Which Will Dispel Your Fears Of Failure.

Vinod Khosla is an American businessman of Indian origin who co-founded Sun Microsytems, Inc. The company was responsible for development of Java programming language, Solaris Unix and the Network File System.
The billionaire has also been a part of many other businesses like the venture capital firm Khosla Ventures. As co-founder of The Indus Entrepreneurs (TiE), Khosla engages in training entrepreneurs. His go to mantra for budding businesses is that only a willingness to fail will help us develop an ability to succeed. Here's an incident when the business conglomerate speaks about success and failures.
Speaking to group of aspiring entrepreneurs, Khosla asked, "How many people here know a company called Sun Microsystems? How many people here know a company called the Data Dump? Not a single hand. "
Then he went on to explain, "My point is the following, McNeiley and I started Sun - everybody knows the company. We also three months before we started a company called the Data Dump. That failed. Nobody remembers failures. In fact my point is success matters. Failure is inconsequential - yet what I hear most people do is not do things because they are afraid of failure.
"People's fear of failure restricts them from doing most of what they can do. I like to say most people are limited by what they think they can do not by what they can do."
Here's a collection of inspiring quotes by Vinod Khosla.
8 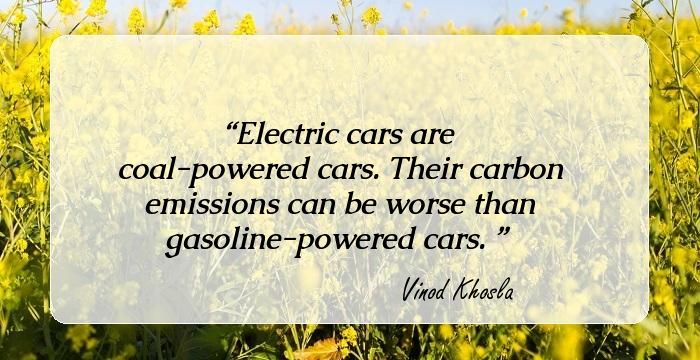 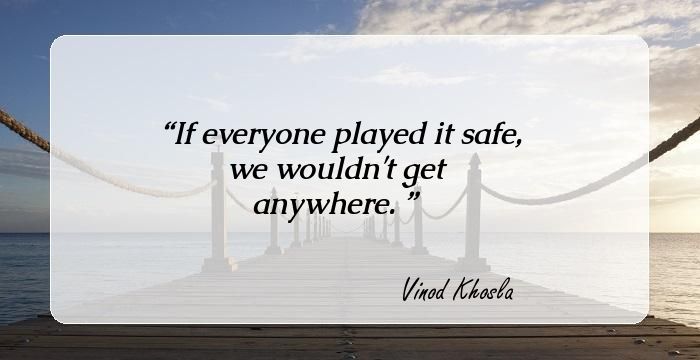 If everyone played it safe, we wouldn't get anywhere.Â 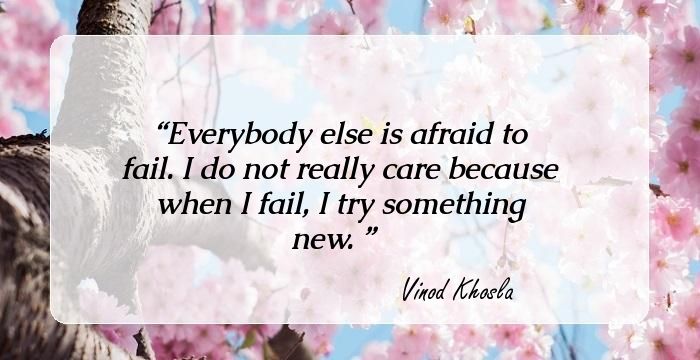 Everybody else is afraid to fail. I do not really care because when I fail, I try something new.Â I've probably failed more often than anybody else in Silicon Valley. Those don't matter. I don't remember the failures. You remember the big successes.Â The only way you multiply resources is with technology. To really affect poverty, energy, health, education, or anything else - there is no other way.Â I'm a fiscal hawk. I vote against all taxes, but I do believe the environment, and climate change, is a bigger issue than fiscal deficits are as a risk to the nation.Â I'm not a political person. I'm a techie nerd, and I enjoy the techie part. I mean, all my life, I've loved great technology.Â We like to say at Khosla Ventures, and this is one of the reasons to do what we do, we'll take technical risks that nobody else will.Â By 2025, 80 percent of the functions doctors do will be done much better and much more cheaply by machines and machine learned algorithms, In the next 10 years, data science and software will do more for medicine than all of the biological sciences together. An entrepreneur is someone who dares to dream the dreams and is foolish enough to try to make those dreams come true. Success comes to those that dare to dream dreams and are foolish enough to try and make them come true. One of the best things data can enable us to do is to ask questions we didn't know to ask. Spreadsheets are fiction. Believing in what you're doing and what you're building is what's important. Your cellphone has 10 sensors, and your car has 400. But your body has none - that's going to change.

Oil replacements and then efficiencies in engines and housing and the way we build houses is a very interesting market. We humans think linearly but tech trends are exponential.