17 Intriguing Quotes By Vinoba Bhave The Man Who Pioneered The Bhoodan Movement.

Mahatma Gandhi established an ashram at the banks of Sabarmati River and youth from all walks of life came to the ashram to contribute to the freedom struggle. Community living was practiced and all the inmates were assigned a share of the daily chores except for the work of cleaning toilets. In those days caste based discrimination was prevalent in the country and manual scavenging was a task reserved for people of the lower caste.

In Sabarmati ashram and old man was hired to help with the work. One day he fell ill and sent his ten year old grandson to fill in for him. The young boy worked diligently but once done he had to lift the bucket full of wastes. He struggled to carry it but no one came forward to help him. The boy grew anxious by the second as this job was the only source of income for their family and if he failed to accomplish the task he might lose the job.

One of Gandhi's disciples decided to take matters into his own hands and helped the little boy carry the bucket. He was admonished by many for doing a job that was meant for the lower caste people and was barred from entering the premises of the ashram. Gandhi, who was away, returned to find heated discussion going on regarding the student’s behavior. They reported the matter to Bapu and expected him to meet out suitable punishment for the guilty. However to everyone’s surprise, Gandhi said that the student in question had done the right thing and that they all need to follow suit. Since that day everyone in the ashram shared the responsibility of cleaning the toilets.

Do you know who this disciple of Gandhi was? He was the pioneer social reformer Vinoba Bhave who started the Bhoodan Movement. Here are a few pearls from the Acharya himself. 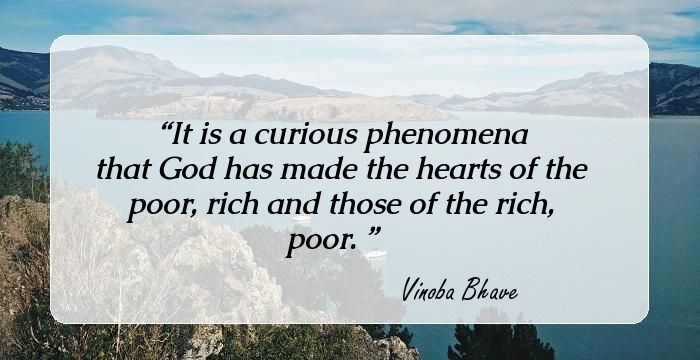 It is a curious phenomena that God has made the hearts of the poor, rich and those of the rich, poor.Ā 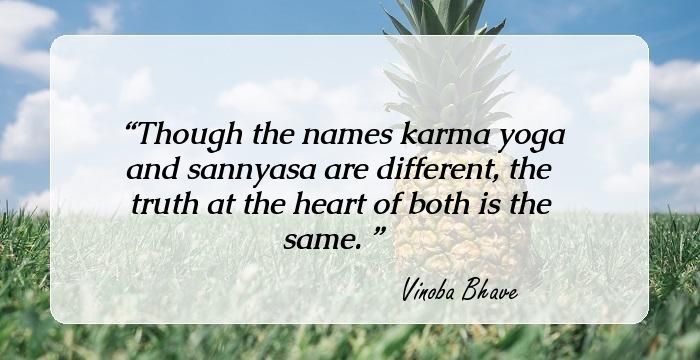 Though the names karma yoga and sannyasa are different, the truth at the heart of both is the same.Ā 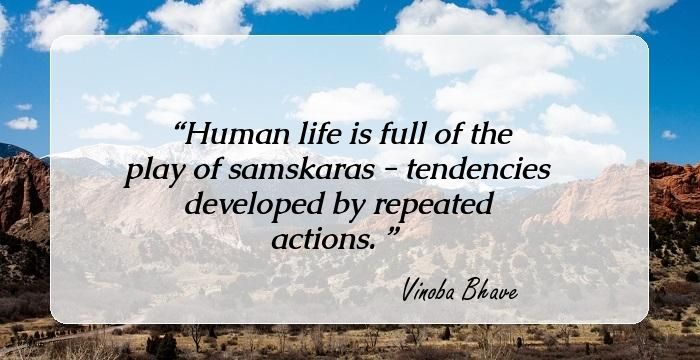 Human life is full of the play of samskaras - tendencies developed by repeated actions.Ā A country should be defended not by arms, but by ethical behavior.Ā If a man achieves victory over this body, who in the world can exercise power over him? He who rules himself rules over the whole world.Ā We cannot even recollect the actions of our infancy, our childhood is like something written on a slate and rubbed off.Ā In this world of chance and change and mutability, the fulfillment of any resolve depends on the will of the Lord.Ā It is only when our life proceeds within bounds and in an accepted, disciplined way, that the mind can be free.Ā If we wish our nature to be free and joyous, we should bring our activities into same order.Ā All revolutions are spiritual at the source. All my activities have the sole purpose of achieving a union of hearts.Ā The river flows at its own sweet will, but the flood is bound in the two banks. If it were not thus bound, its freedom would be wasted.Ā The main reason why we look constantly to the Gita is that, whenever we need help, we may get it from the Gita. And, indeed, we always do get it.Ā Innumerable actions are going on through us all the time. If we started counting them, we should never come to an end.Ā In nonviolence you must go full steam ahead, if you want the good to come speedily you must go about it with vigor.Ā Do not allow yourself to imagine that revolutionary thinking can be propagated by governmental power.Ā When a thing is true, there is no need to use any arguments to substantiate it.Ā