A. R. Rahman is India's most loved and respected musical maestro. His fame travels far and wide across the globe. The musical prodigy enchanted music lovers even as a kid when he appeared on Doordarshan's talent show 'Wonder Balloon' and displayed his skills by effortlessly playing four keyboards at once.

Known among his peers for his calm composure and childlike enthusiasm, not surprisingly Rahman listed humility as a top quality when his mother, Kareema Begum, enquired about the kind of girl he wanted to spend his life with. In his own words, "The girls should have some education, some beauty and loads of humility!"

One day while Kareema was visiting the mosque when she saw a girl offering prayers and took an instant liking to her. But when she approached the girl's family, they told Kareema that it is not Meher (the girl she had met) but her elder sister Saira that they are looking for a groom. Kareema met Saira and she realized that the girl would fit the bill perfectly.

The first meeting between Rahman and Saira went rather amusingly as the music whizz reminiscences, “My first meeting with Saira was rather amusing. Back then, she only spoke Kutchi. I asked her whether she was interested in marrying me. I’d also told her what kind of life was going to be offered to her. She was very quiet then, but now I know she is anything but quiet! I had to smile throughout our three-hour meeting and, by the end of it, it was almost a pain.” Finally with the blessings of both the families, the two entered wedlock and are blessed with three children.

Here are a few gems from the extremely talented musician. 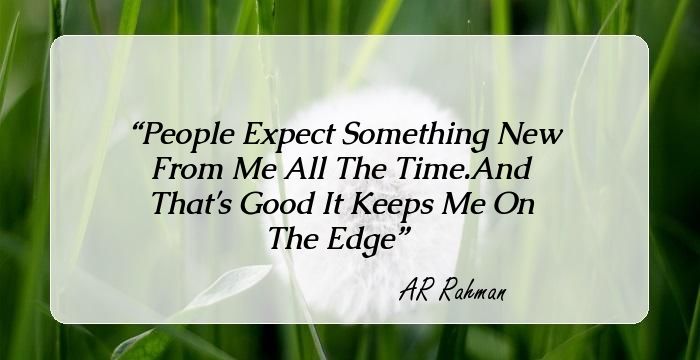 People Expect Something New From Me All The Time.And That's Good It Keeps Me On The Edge 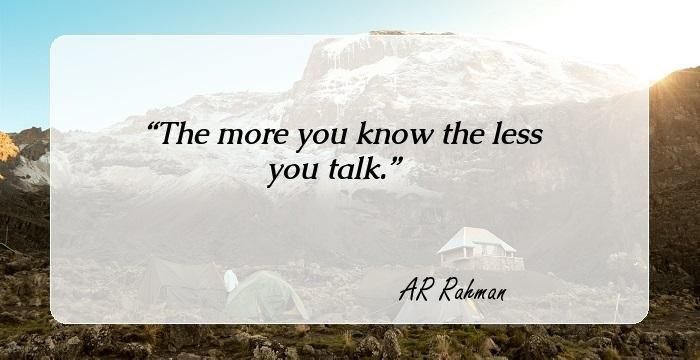 The more you know the less you talk. 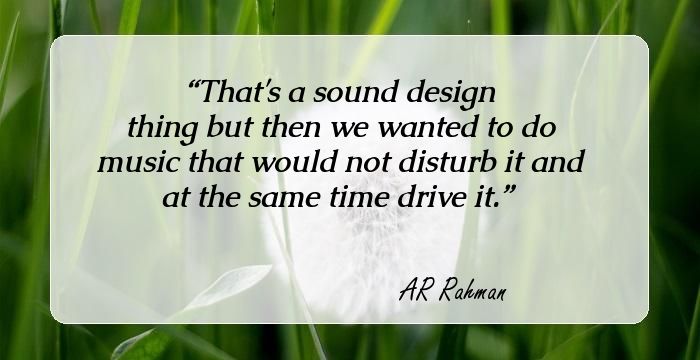 That's a sound design thing but then we wanted to do music that would not disturb it and at the same time drive it. If music wakes you up, makes you think, heals you...then, I guess the music is working. Your best success comes after your greatest disapponitment Be original and find your inner voice. The rest will follow. All my life I have had a choice of hate and love. I chose love and I am here There is only one of the two that can reside in our hearts, GOD or ego. If GOD is in ego is out. I believe that whatever comes at a particular time is a blessing from God. Music is all about transporting people; speaking a language which languages fail to express. Music is something that takes you to a world which is very different from the world of hatred,jealousy, and all those negative emotions You can't be without passion. Passion means the possessiveness to be the best. No regrets. There is no time for that. Regret is boring. I want to go beyond the restrictions of language, religion and caste, and music is the only thing that allows me to do that. When you do something with a lot of honesty, appetite and commitment, the input reflects the output. The music had to be rooted, and yet had to branch out,like the wild imagination of a child. I love the voice - itâ€™s the most perfect instrument ever heard. Itâ€™s God given. In my case dust has become Gold Your inner voice is the voice of divinity. To hear it, we need to be in solitude, even in crowded places. There have been predictions that the world will come to an end on 21.12.12. But I look around me and I see so much scope for hope. The idea of music is to liberate the listener and lead him to a frame where he feels he is elevated. Sometimes I intentionally cut it off. I just want to be in silence, especially when I'm traveling. I watch movies without sound. I love classical music. I love a lot of musicians playing together and the whole culture of that, whether it's Indian or it's Western. The search is more important than the destination While other creators make a big show of their art Mani Sir makes it look as though anyone can do what he does. I wanted to be part of something bigger I like music that is able to stir my soul. My music is a spiritual exercise I compose music for films, and by the grace of God, I've got a few awards. That's it. If you respect a language and culture, it shows in your work. Beautiful film music can be made relevant to any period.