11 Inspirational Quotes By Subramanya Bharathi, The Great Tamil Poet, That Will Inspire You To Fight Against Injustice.

Chinnaswami Subramanya Bharathi was a revered political activist and social reformer from South India. He is also regarded as one of the greatest Tamil poets of all time. Here's a small incident from his life describing what differentiated Subramanya from others.
Subramanya's nationalist poems had inspired many and one such man who had a change of heart was a local goon. An outlaw he was looked down by the society but he reformed his ways and started diligently following Subramanya. He would be constantly seen with the revered leader who embraced him without any qualms. The Brahmin society sniggered at Subramanya's choice of company and one of his well-wishers once told him what people were talking behind his back. He informed that people had started to believe that the rowdy had begun to influence Subramanya with his company. At this giving a proof of his all-encompassing attitude he said, "Let them speak. They can just speak. If they want a proof that I'm not getting converted to a rowdy, let them speak to my soul friend / my bodyguard (just for now)".
Here are some of the best inspirational quotes by the famous poet and activist Subramania Bharathi.
1 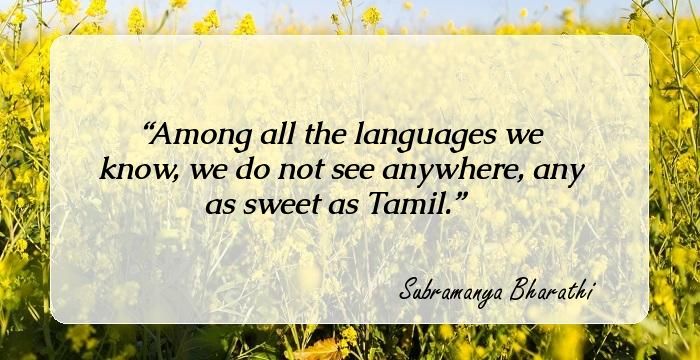 Among all the languages we know, we do not see anywhere, any as sweet as Tamil. 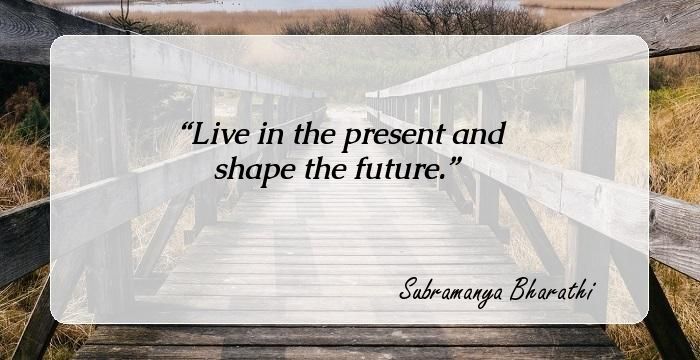 Live in the present and shape the future. 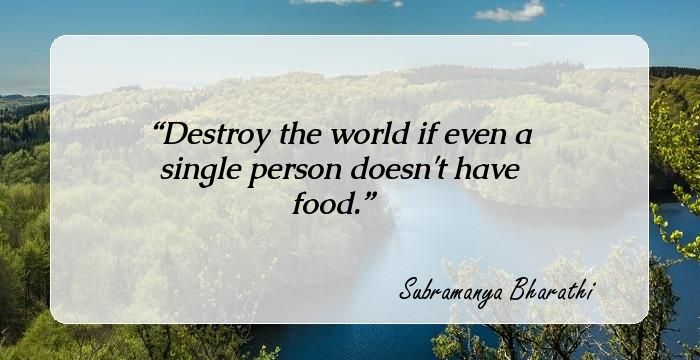 Destroy the world if even a single person doesn't have food. He who writes poetry is not a poet. He whose poetry has become his life, and who has made his life his poetry it is he who is a poet. There is no caste. Live in the present and shape the future, do not be casting lingering looks to the distant past for the past has passed away, never again to return. World will prosper in knowledge and intellect, if both men and women are deemed equal. All are kings of this land. Fools! Do you argue, that things ancient ought, on that account, to be true and noble. We may have thousand of sects; that, however, does not justify a foreign invasion.