22 Inspirational Quotes By Azim Premji The Czar Of The Indian IT Industry That Will Let You Overcome All Traces Of Self-Doubt.

It was a convocation day at IIT Madras and during the ceremony one of the students narrated a story of a little girl.

The girl had a little brother who was suffering from a brain tumor and doctors advised operation. However the surgery would cost a fortune and she overheard her parents that nobody was willing to lend them the money and only a 'miracle' could save their son now.

Deciding to take matters into her hands the little girl poured out all her savings and went to the medical store to buy a miracle. She approached the counter where the pharmacist asked her what she needed. She replied, "It's for my little brother. He's really, really sick and I want to buy a miracle."

"I beg your pardon?" said the pharmacist. "His name is Andrew and he has something bad growing inside his head and my daddy says only a miracle can save him. So how much does a miracle cost?"

The pharmacist politely informed her that they don't sell miracle at the store and urged her to go home. However the little girl stood her ground and said , "Listen, I have the money to pay for it. If it isn't enough, I can try and get some more. Just tell me how much it costs."

A fellow customer was intently listening to this conversation and he asked the little girl, "What kind of a miracle does you brother need?"

"I don't know," she replied with her eyes welling up. "He's really sick and mommy says he needs an operation. But my daddy can't pay for it, so I have brought my savings".

"How much do you have?" asked the man.

"One dollar and eleven cents, but I can try and get some more", she answered.

"Well, what a coincidence," smiled the man. "A dollar and eleven cents the exact price of a miracle for little brothers."

The man then went to the little girls place with her and met her parents and introduced himself as Dr Carlton Armstrong, a neurosurgeon. He performed the surgery on the boy and he made full recovery.

"That surgery," her mom wondered "was a real miracle. I wonder how much it would have cost?" The little girl smiled. She knew exactly how much the miracle cost one dollar and eleven cents ... plus the faith of a little child.

The narrator concluded saying, "Perseverance can make miracles happen." He was none other than Azim Premji who diversified Wipro and transformed it into one of the leading It companies across the globe. Here are a few motivational and thought-provoking quotes by Azim Premji himself. 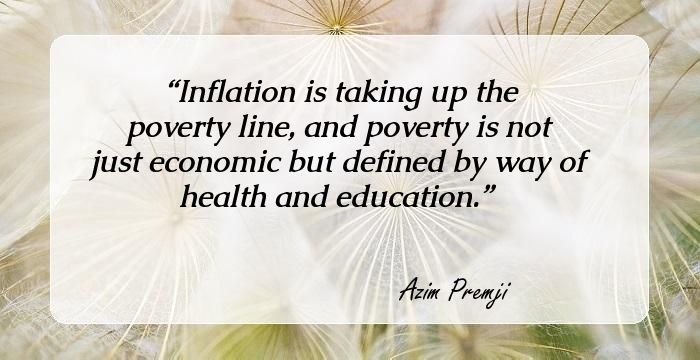 Inflation is taking up the poverty line, and poverty is not just economic but defined by way of health and education. 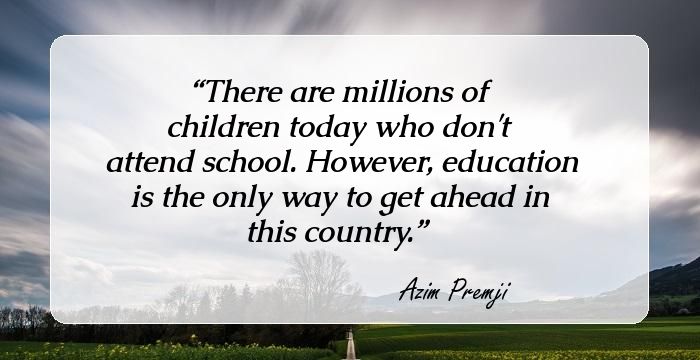 There are millions of children today who don't attend school. However, education is the only way to get ahead in this country. 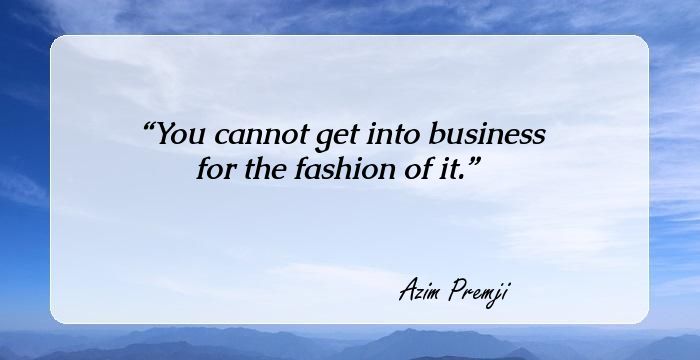 You cannot get into business for the fashion of it. I can speak English. I can speak Hindi. I can understand one or two other languages. People have to take control of their own lives. Education is key because it also raises other social indicators like healthcare. A girl child who is even a little bit educated is more conscious of family planning, health care and, in turn, her children's own education. Success is achieved twice. Once in the mind and the second time in the real world. I think the advantage of democracy is that it makes us less dependent on a group of leaders. People are the key to success or extraordinary success. There are 600 districts in India. Every district in India has a teacher-training institute. The Western world loves liberalisation, provided it doesn't affect them. Talent is in short supply everywhere. At Wipro, we are training nonengineers to be engineers. Colleges produce more sports therapists than engineers. Perhaps because America is a sporty country: a lot of outdoors. The concept of the strong linkage to the family is breaking down in Western nations. Frankly, I don't know how many companies there are, globally, which are truly global. If people are not laughing at your goals, your goals are too small. Leadership is the self-confidence of working with people smarter than you. As you get bigger, you have to learn to delegate. When the rate of change outside is more than what is inside, be sure that the end is near. My company believes in hiring people based on merit. I want Wipro to be among the top ten IT companies in the world. As an advisor, I can say what I want. If I were a politician, I would constantly have to compromise, and I'm incapable of doing that.