25 Inspirational Quotes By Vijay Mallaya The Poster Boy Of Flamboyance And Lavishness.

Vijay Mallya is a Indian businessman who owns the Kingfihser beer and Kingfisher Airlines. Known for his flamboyant lifestyle, Mallaya has recently come to limelight for defaulting on an amount Rs 9,000 crore to 17 banks. Here are a few titbits from the life of the business magnate.

1. Mallya has always been associated with lavishness; however what not many know is that he is a deeply religious person. Every flight acquired by the Kingfisher Airlines was made to visit the shrine of Tirupati before it made its maiden journey.

2. Mallaya grew up in the City of Joy and attended the Le Martinere where he was the House Captain. Known for his competitive streak since his early days Mallaya fought tooth and nail to clinch the 'Best Student Award.' However he was defeated by another student named Rafiq Zakaria.

3. The King of Good Times loves coastal cuisine and gorges on delicacies like 'Kane rava,' and 'Kori gasi.' He is also known to have a sweet tooth for 'Mishti Doi.'

4. He is a workaholic and those who know him personally say they have never seen the business mogul take a day off. Whether he is at parties or in his swanky house he is always working.

5. Mallaya's penchant for brands and technology is evident but he does not hesitate to pick stuff from flea markets too. 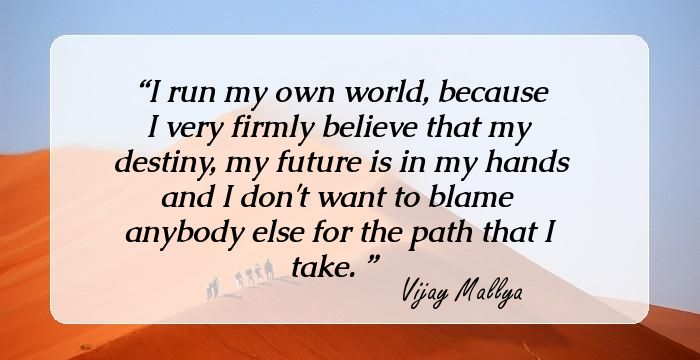 I run my own world, because I very firmly believe that my destiny, my future is in my hands and I don't want to blame anybody else for the path that I take.Ā 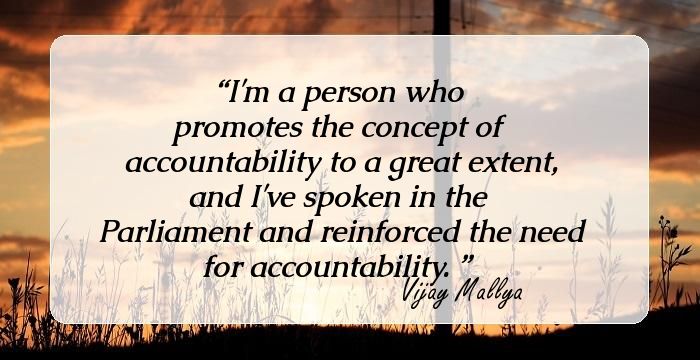 I'm a person who promotes the concept of accountability to a great extent, and I've spoken in the Parliament and reinforced the need for accountability.Ā 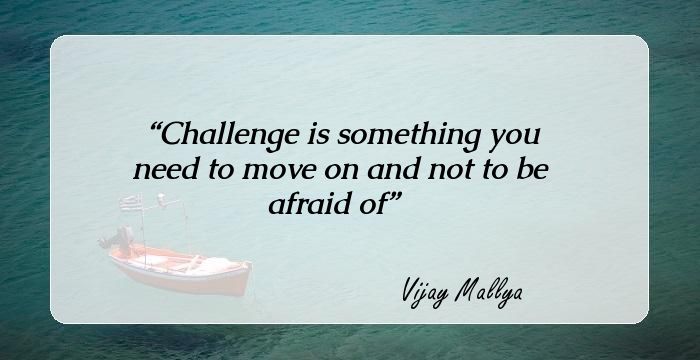 Whenever I do something, it is rooted in the Indian opportunity.Ā I am an honest, straight guy.Ā I live the way I want to live, and I don't comment on the way that other people live.Ā Our culture in India is not a culture where we grudge each other.Ā I don't like to leave anything unfinished on my desk before I travel.Ā Banks are there to support businesses that have justifiable needs.Ā I am pretty tough as a boss.Ā Rather than spend millions getting film stars, I am quite happy to be brand ambassador myself.Ā It's not quite right to be sitting outside India and to be judging what is happening in India.Ā One of India's biggest advantages is our young demographic and that we have a youthful population that is indeed our future.Ā I live life what I consider to be normal.Ā I do not believe in hypocrisy. I spend my own money, not other people's money.Ā I think it is better when people with their own businesses and means of income join politics as there is some degree of honesty and integrity.Ā I work hard and I play hard, too. There is nothing wrong with that.Ā I'm not a T.G.I.F. guy. I get off a plane at 2 o'clock in the morning and I'm looking for my secretary because I want to know what's going on.Ā I think that the poorest of the poor... look up to wealthy and successful Indians with some degree of respect and pride.Ā Any serious airline has to look at a worldwide network.Ā If you want India to lower tariffs and facilitate more free trade, then I think Indian producers also have a right to enter the European market.Ā Life is full of ups and downs. Failures are an inevitable part of our life. Don't let them get you down They take pride in the success of fellow Indians as well