16 Motivational Quotes By Nandan Nilekani The Co-Founder Of Infosys That Will Fill You With Passion.

Nandan Nilekani is the former chairman of Infosys, and one of the co-founders. In 2009 he bid adieu to the organization after working for a little less than three decades.

It was at the Electronic City campus of Infosys Technologies that more than 20,000 employees and close friends had gathered for his farewell ceremony. In an emotion laden speech the founder addressed his employees, "I am generally very articulate but this is not the day or place where I can be articulate. I've been wrapped up in Infosys for 28 years. My only identity is Infosys. I will be going to lead a programme to give identity to every Indian. But today I am losing my identity.''

Regaling his experiences when Infosys was in its nascent stage, Nilkeni recollected how he carried his first computer on his lap during a trip he was making from Mumbai to Bangalore.

The electrical engineer decided to pursue a career in public service when Prime Minister Dr. Manmohan Singh approached him to head the UIDAI – Aadhar Card project.

Commenting on the transformation in his job, Nilekani said, "I am leaving an organized world. Here, standing at the top of an abyss, even if I were to fall, I may find water. But, in my new role, I'm supposed to work with 600 government departments knowing fully well that no two government departments get along with one other.'' However he also added that public service was always at the back of his mind, and that his father and uncle were also public servants.
3 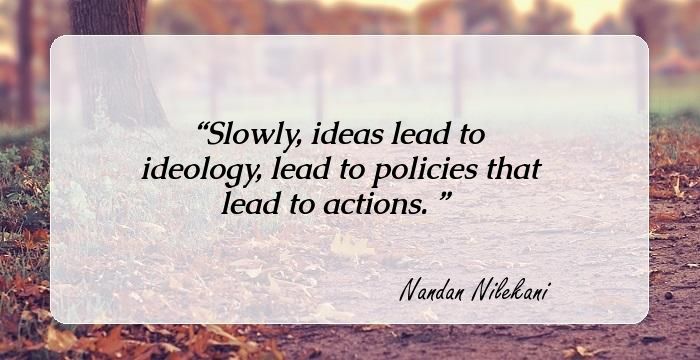 Slowly, ideas lead to ideology, lead to policies that lead to actions.Â 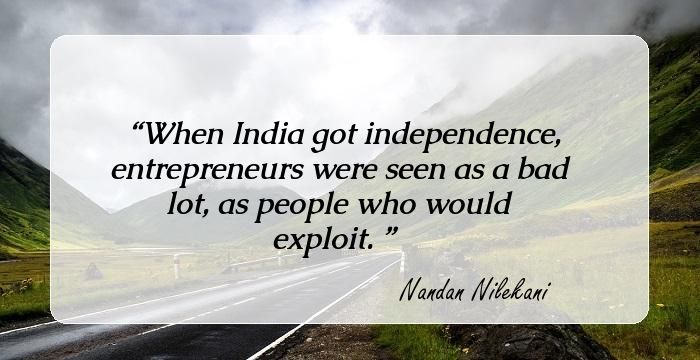 When India got independence, entrepreneurs were seen as a bad lot, as people who would exploit.Â 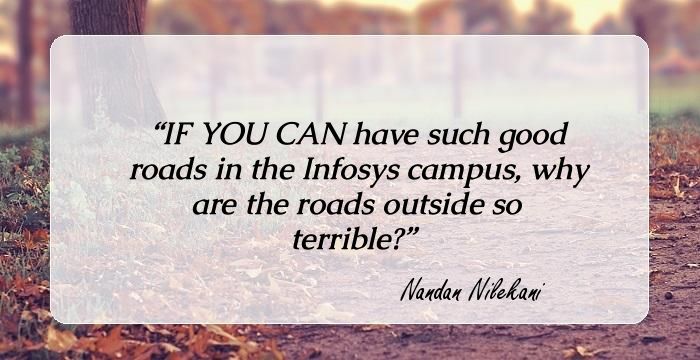 IF YOU CAN have such good roads in the Infosys campus, why are the roads outside so terrible? We took Infosys public. That was a nonstop three-week global roadshow.Â It's because Gandhi believed in villages and because the British ruled from the cities; therefore, Nehru thought of New Delhi as an un-Indian city.Â I think politics is the biggest lever of change in India.Â I am proud of the fact that my wealth is completely transparent.Â Congress is my ideological home; I come from a Nehruvian family.Â Bangalore needs a honest, passionate and hard-working MP, and I will be that MP.Â I don't decide my politics based on the flavour of the month.Â I am not in politics to make more money.Â I made my money in an honest way. And I have declared it all. By co-founding Infosys along with Mr. Murthy and others, I earned financially.Â I'm in politics to make the lives of millions of Indians better.Â The biggest thing the money Infosys brought me is the freedom to do what I want. And what I want is to give millions more the opportunities I had.Â My background is putting in large systems that change lives... The right kind of systems can bring honesty and efficiency.Â Where a Michael Bloomberg could be the CEO of a large company one day and get elected as New Yorkâ€™s mayor the next.â€ťÂ