Madhuri Dixit the Bollywood diva has sizzled the silver screen with her dance performance and made audiences go gaga with her acting skills. The actress took a break from her acting career post marriage to Dr. Sriram Nene. The dance musical Aaja Nachle was her comeback movie and she also performed at the Filmfare Awards 2006. Here's how the actress finally ended up performing at the event.

Madhuri was on a vacation in India when Filmfare organizers approached her for a performance. She was initially reluctant but finally gave in after much persuasion. The star studded event sparkled all the more at the behest of Madhuri's sensous performance on the songs of Devdas. The actress said, "Since I had been with the industry for so long I thought it would be nice if I caught up with all my colleagues through my performance."

Someone once asked how her kids react to her stardom. The actress replied, "Once in LA I tried to show them my songs. They weren't interested. And when I showed my son my face on the DVD of Devdas he casually said, 'That's you, Mom' He doesn't connect with my stardom. It would be fun to see how they react to Madhuri the star."
6 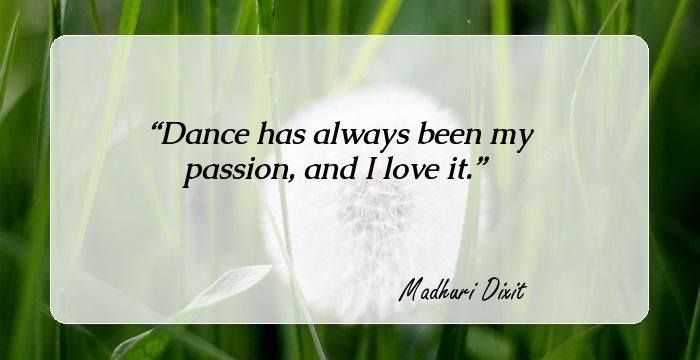 Dance has always been my passion, and I love it. 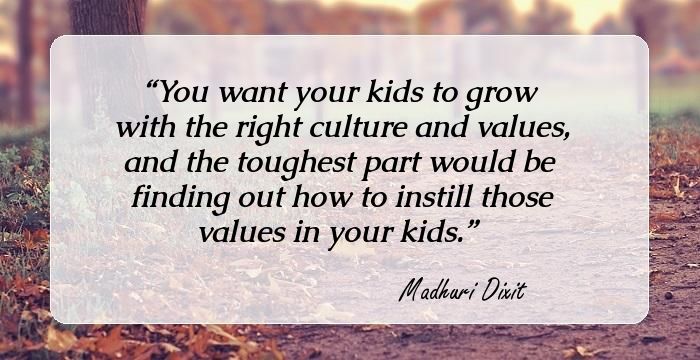 You want your kids to grow with the right culture and values, and the toughest part would be finding out how to instill those values in your kids. 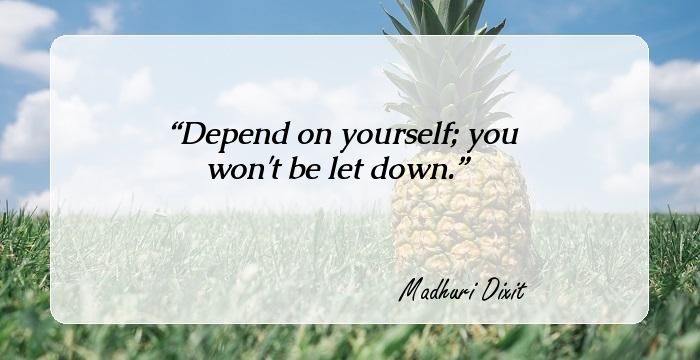 Depend on yourself; you won't be let down. Let your smile change the world. Don't let the world change your smile. I try to give my best to everything I do. I don't think of housework as beneath my dignity; that's just the way I was brought up. There's a child within me. Everything is fascinating. The hunger to learn, do better and more creative things never goes. I think there is no mantra for success. One just has to be positive and keep doing good work. One must keep moving forward and not think much. I had never dreamt I'd become an actress. It was destiny that put me in the right place at the right time and gave me the right opportunities. Mumbai is like Manhattan. There's a certain pace, a social life and the thrill of a professional life. It's so ironic - when you finally achieve recognition, you hide behind dark glasses. I don't fear aging. It's natural, and I can't stop it! Action is tough, but so am I! I have never struggled for anything in my life because I never thought I will be an actress. Film just walked up to my house with 'Abodh.' The tendency in the media is to portray everyone in the film industry as sex-starved creatures. Please spare us. Age is just a number, and your talent will never fail you. It has no expiry date. People used to say I can't make it big in Bollywood.