Preity Zinta was a heart throb of millenials when she made her debut in Dil Se and later she made us groove to the tunes of 'Soldier Soldier...' Presently she co-owns the IPL team King XI Punjab. Here's an account of how the actress got her first break.

Though the actress first appeared in Mani Ratnam's Dil Se, it was filmmaker Shekhar Kapur who first noticed her while he was deciding the cast for his movie Tara Rum Pum. The lively carefree girl with dimples fit the bill perfectly for the role of the lead actress in the script and though she had not come for the auditions he walked up to her and asked, “would you like to act in my film?”

The actress says, “I was totally flummoxed because I didn’t expect it, so I and blurted out ‘But I don’t know how to act’. ‘Never mind,’ he said, and proceeded to give me an hour-long lecture on why I should do the film because he could see that I was going to be a big star.”

Though the project never materialized, he mentioned Preity to iconic filmmaker Mani Ratnam who was looking for a supporting actress in Dil Se. It took only one audition for him to finalize Priety in a role opposite King Khan himself and rest as they say is history. 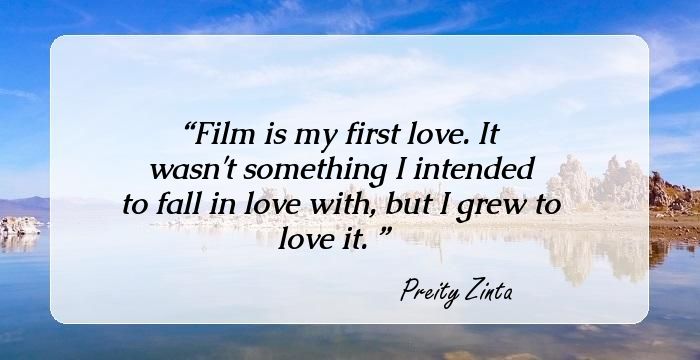 Film is my first love. It wasn't something I intended to fall in love with, but I grew to love it.Â 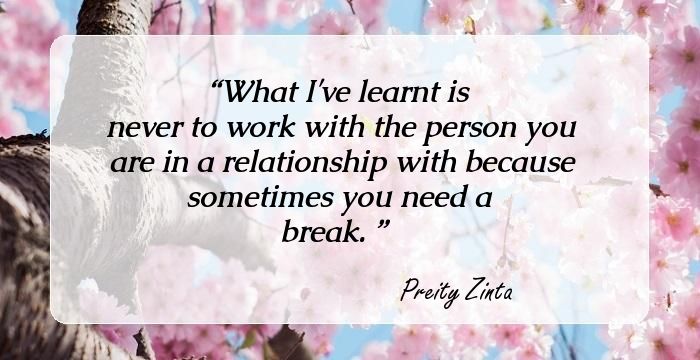 What I've learnt is never to work with the person you are in a relationship with because sometimes you need a break.Â 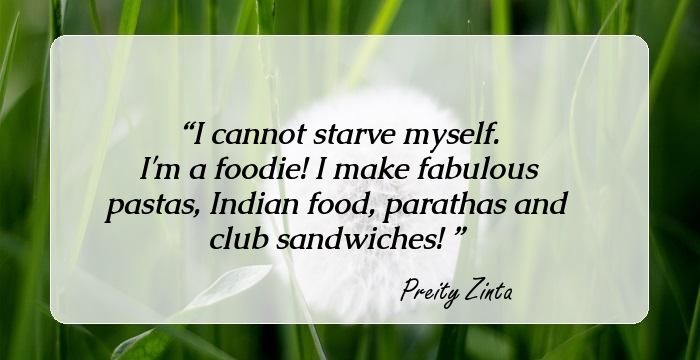 People will always have an opinion, but you have to live life the way you want to. It's very easy to tell others what to do, but difficult to implement it on yourself.Â I've learnt that there's a soul mate somewhere in this world. Till you don't find that person, the search goes on.Â Two things in India are religion - one is cricket, and one is movies - these are two things.Â If I can be my crazy, wild self in front of a person, and he still likes me, that's romantic. Just like a script, you need to keep a business plan to yourself.Â I have this whole thing that when God gives you more that you have imagined, you should give it back.Â You know what's the worst part about being an actress? It's the pressure to look gorgeous all the time and to behave perfectly. But I'm not perfect; nobody is.Â Films are a part of my being, they don't define me.Â I moved to cricket at a time when I was at the peak of my career, and I can guarantee you that no one else from Bollywood would have done that.Â When I entered films, I rose to the top. In business, too, I want to be at the top.Â I stay away from negative relationships. They are energy-sapping vampires. I can't handle them.Â Acting can truly take a toll on your nerves. I mean, we have to be larger than life. Worse, I've seen actors acting off the sets, too.Â If women want to be treated equally, then they can't ask for sops and whine about not being treated equally. All I'll say is no guts, no glory for men or women.Â