18 Inspirational Quotes By Atal Bihari Vajpayee The Man Who Made The UN Sit Up And Take Notice With His Words.

Atal Bihari Vajpayee was the tenth Prime Minister of India who is well known for his oratory skills. Dubbed as the 'Bhishma Pitamah of Indian politics', Bharat Ratna Atal Bihari Vajpayee began his tryst with politics in independent India when social reformer called for protests against internal emergency declared during Indira Gandhi's regime.

He was appointed the Minister of External Affairs in the government formed by Janta Party headed by Morarji Desai. In 1977, Vajpayee addressed the United nations General Assembly in Hindi, the first time ever in history.

Prior to joining the right wing which comprised of RSS, Vajpayee was a communist afficianado. However the pro-Hinduism agenda of RSS grabbed his attention and he pledged his loyalties to them.

The statesman par excellence attended law school with his father and the two even shared the same dormitory. However, Atal abandoned legal studies in between in order to run a magazine for the RSS.

The former Prime Minister is a Hindu Brahmin yet he likes to devour non-vegetarian food, Chinese and prawns being his favorite.

Though Vajpayee has retired from active politics, his words still reverberate in our ears and shall continue for generations. Here are a few inspirational and thought-provoking quotes by Atal Bihari Vajpayee.
1 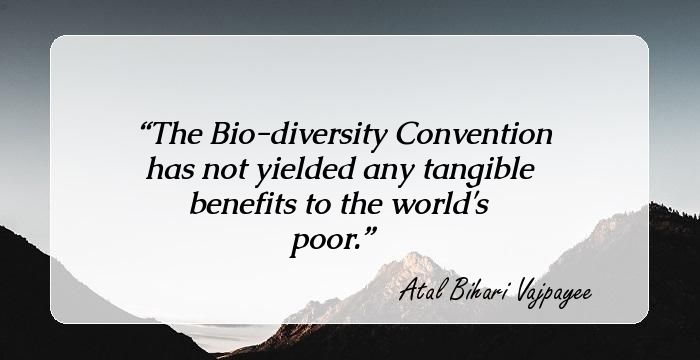 The Bio-diversity Convention has not yielded any tangible benefits to the world's poor. 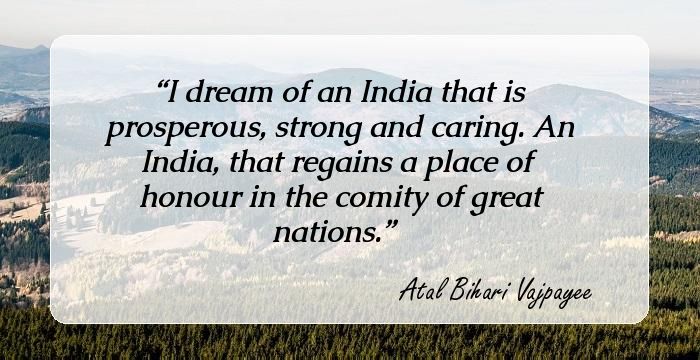 I dream of an India that is prosperous, strong and caring. An India, that regains a place of honour in the comity of great nations. 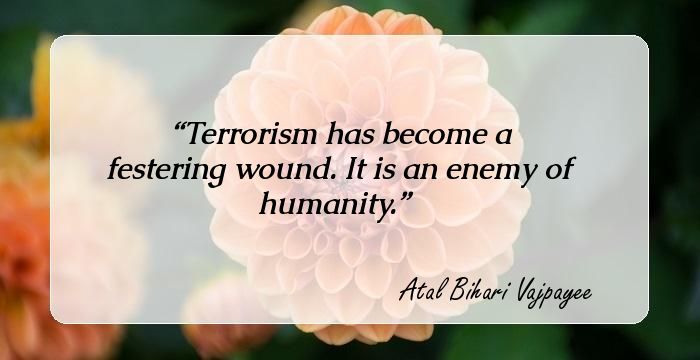 Terrorism has become a festering wound. It is an enemy of humanity. Politics is a game of compromise. Truth cannot be hidden for fear that somebody would exploit it. It is easy to win elections by raising slogan of â€śgaribi hataoâ€ť but slogans do not remove poverty. You can change friends but not neighbours.Â There was an implicit conviction that the UN would be stronger than the sum of its constituent member-states. We believe that ultimate victory will be ours, because we best represent the needs and aspirations of India today. I would like that no citizen of the state feels alone and helpless. The entire nation is with them. In the euphoria after the Cold War, there was a misplaced notion that the UN could solve every problem anywhere. No state should be allowed to profess partnership with the global coalition against terror, while continuing to aid, abet and sponsor terrorism. We hope the world will act in the spirit of enlightened self-interest. Our nuclear weapons are meant purely as a deterrent against nuclear adventure by an adversary. My government is committed to carrying out electoral reforms. It is our firm resolve to keep criminal elements away from power.Â The reality is that international institutions like the UN can only be as effective as its members allow it to be.Â