21 Famous Quotes By Sardar Patel, The Iron Man Of India, That Will Stir Up The Idealist In You.

A lawyer was arguing his case in the court when he received a note that his ailing wife had passed away. Instead of rushing to be with his deceased spouse, the lawyer folded the note and carried on. The verdict was passed in favor of his client. Only after the proceedings came to an end did he inform everyone of the sad news. Know who was this great lawyer? It was none other than the Iron Man of India, Sardar Vallabhbhai Patel.

Patel was known for sacrificing his own happiness for the sake of others. He desired to study law in London so he saved up enough and applied for the required documents. However as fate would have it the documents were delivered to his elder brother who had the same initials. At his brother's insistence, he allowed him to go to London instead of him. However he went to accomplish goal later on in his life.

Patel was known to have returned from the clutches of death not once not twice but thrice. His first encounter with the Grim Reaper was when he suffered from the deadly Bubonic plague, but fortunately survived. After Bapu's assassination he nearly died of a massive heart attack. The third time was in 1949 when the plane he was travelling in, lost radio contact owing to some technical difficulty. The carrier however made an emergency landing and everyone escaped unhurt. 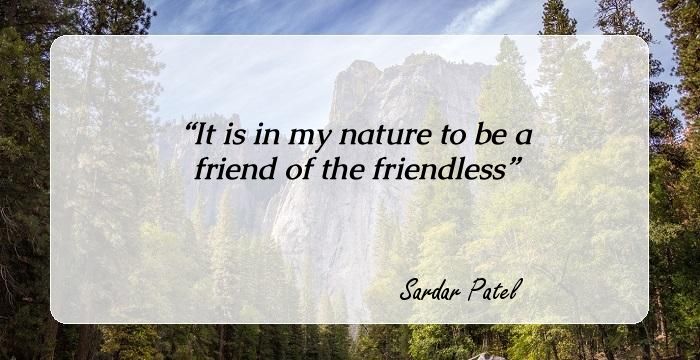 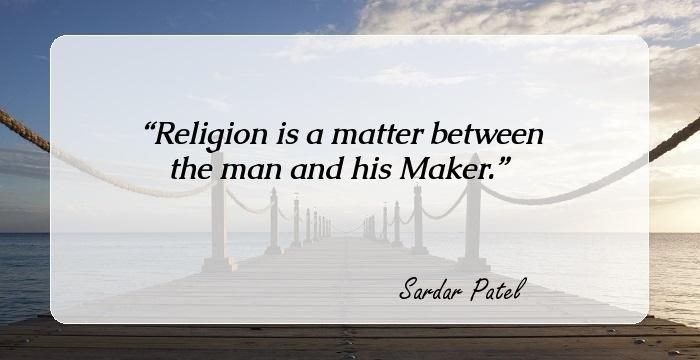 Religion is a matter between the man and his Maker. 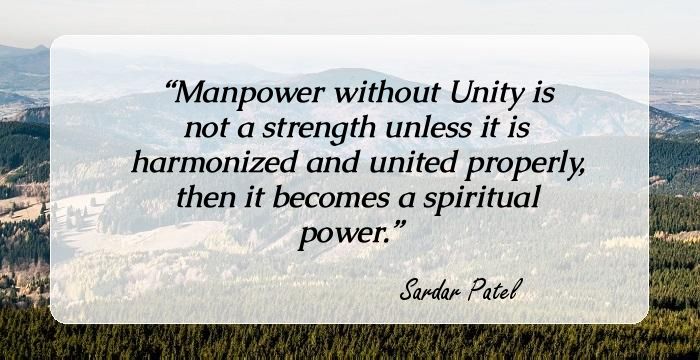 Manpower without Unity is not a strength unless it is harmonized and united properly, then it becomes a spiritual power. Today we must remove distinctions of high and low, rich and poor, caste or creed. Every citizen of India must remember that he is an Indian and he has every right in this country but with certain duties. Faith is of no avail in absence of strength. Faith and strength, both are essential to accomplish any great work. Ours is a non-violent war, It is Dharma YUDDHA. There is something unique in this soil, which despite many obstacles has always remained the abode of great souls. Tell Churchill to save England first before saving India. Caste, community will rapidly disappear. We have to speedily forget all these things. Such boundaries hamper our growth. My only desire is that India should be a good producer and no one should be hungry, shedding tears for food in the country. It is the prime responsibility of every citizen to feel that his country is free and to defend its freedom is his duty. Even if we lose the wealth of thousands, and our life is sacrificed, we should keep smiling and be cheerful keeping our faith in God and Truth. It is only so long as a man can retain the child in him that life can be free from those dark shadows which leave inevitable furrows on a man92s forehead. In a domestic Government unity and co-operation are essential requisites. Satyagraha is not a creed for the weak or the cowardly. Your goodness is impediment in your way, so let your eyes be red with anger, and try to fight the injustice with a firm hand. A war based on Satyagraha is always of two kinds. One is the war we wage against injustice, and the other we fight our won weaknesses By common endeavor we can raise the country to a new greatness, while a lack of unity will expose us to fresh calamities