11 Inspirational Quotes By Lal Bahadur Shastri That Will Help You Face Adversities With Bravery.

Lal Bahadur Shastri was the second Prime Minister of India who was instrumental in establishing peace between India and Pakistan. During his visit to Tashkent, he was gifted a Russian Coat by Soviet-Russian statesman Alexei Kosygin. However instead of donning the warm coat, Shastri lent it to one of his staff. When Kosygin gave asked him whether he liked the coat, the Indian PM replied, it was beautiful indeed but his staff had nothing to protect him from the bitter cold weather so he lent it to him as his own khadi coat was warm enough. At this Kosygin commented, “We are Communists but Prime Minister Shastri is a super Communist.”

A believer of 'want not, waste not' Shastri led a honest and simple life and put ideals before everything else. One time his sons went on a ride in the Government provided car so Shastri deposited the fuel expenses for the trip with the Government funds, from his own salary. Once during the independence movement he was imprisoned and his daughter was severely ill and died. Shastri was given a leave of twelve days for performing his daughter’s final rites. However realizing the criticality of the situation he returned in three days after performing the funeral. 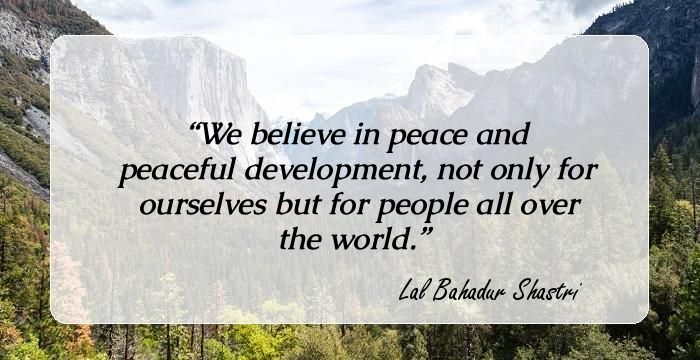 We believe in peace and peaceful development, not only for ourselves but for people all over the world. 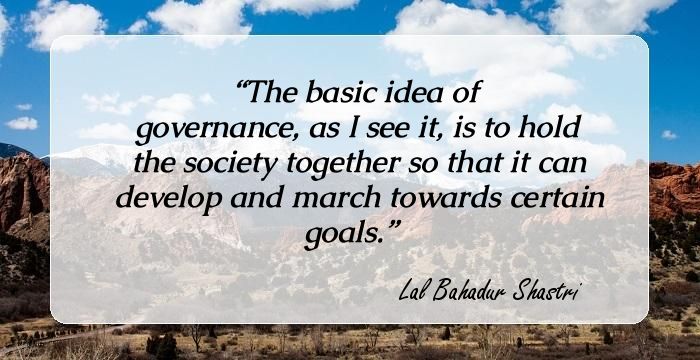 The basic idea of governance, as I see it, is to hold the society together so that it can develop and march towards certain goals. 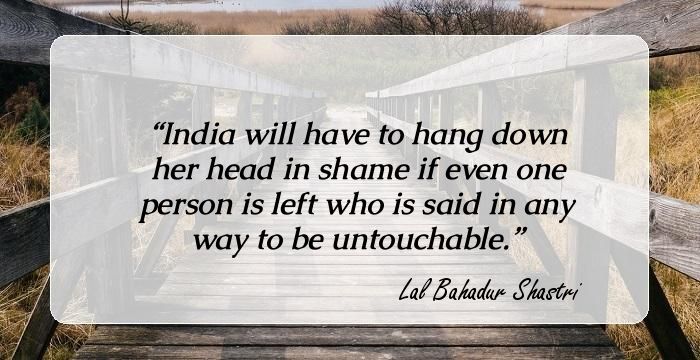 India will have to hang down her head in shame if even one person is left who is said in any way to be untouchable. The preservation of freedom, is not the task of soldiers alone. The whole nation has to be strong. I am not as simple as I look. We have now to fight for peace with the same courage and determination as we fought against aggression. That loyalty to the country comes ahead of all other loyalties. And this is an absolute loyalty, since one cannot weight it in terms of what one receives. The rule of law should be respected so that the basic structure of our democracy is maintained and further strengthened. The economic issues are most vital for us and it is of the highest importance that we should fight our biggest enemies - Poverty, unemployment. Those who govern must see how the people react to administration. Ultimately, the people are the final arbiters. True democracy or the swaraj of the masses can never come through untruthful and violent means.