It was Teen Murti, the residence of India's Prime Minister and the premier was a taking a stroll in the open gardens when he heard the wails of an infant. Initially startled, he tried to find the source of the noise. When he reached the spot, the baby was crying at the top of his voice. He tried to find the baby's mother but unable to do so he picked up the kid and rocked him till he stopped crying. When the baby's mother who was working in the grounds came a while later, she was taken aback to see that none other than the Prime Minister of India was playing with her child. Do you know who was this political figure? It was none other than Chacha Nehru, the first Prime Minister of India.

One time Nehru was visiting the city of Hyderabad and during his trip he stopped over at the Institute Of Mental Health. At the facility he met a patient who shot looks in his direction. Intrigued, Nehru greeted him but the man did not reply. Then he introduced him as the Prime Minister. At this the patient asked him to not say that loudly. When Panditji asked him the reason he explained that he said the same thing outside and he was admitted to the asylum. 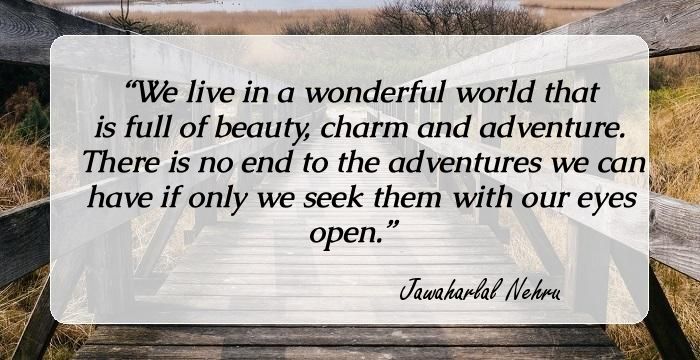 We live in a wonderful world that is full of beauty, charm and adventure. There is no end to the adventures we can have if only we seek them with our eyes open. 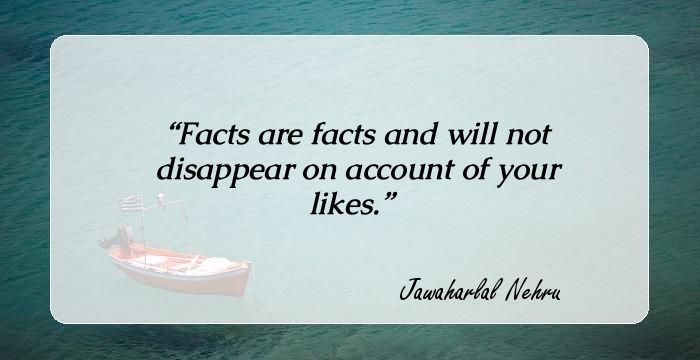 Facts are facts and will not disappear on account of your likes. 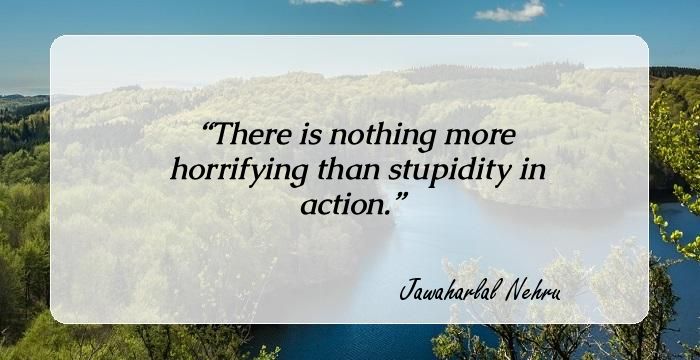 There is nothing more horrifying than stupidity in action. The policy of being too cautious is the greatest risk of all. Life is like a game of cards. The hand that is dealt you is determinism the way you play it is free will. Culture is the widening of the mind and of the spirit. The forces in a capitalist society, if left unchecked, tend to make the rich richer and the poor poorer. The best and noblest gifts of humanity cannot be the monopoly of a particular race or country its scope may not be limited nor may it be regarded as the miser's hoard buried underground.

- The Discovery of India, Jawaharlal Nehru If any person raises his hand to strike down another on the ground of religion, I shall fight him till the last breath of my life, both as the head of the government and from the outside Loyal and efficient work in a great cause, even though it may not be immediately recognized, ultimately bears fruit There is no end to the adventures that we can have if only we seek them with our eyes open. Time is not measured by the passing of yaers but by what one does, what one feels, and what one achieves. Culture is the widening of the mind and of the spirit Politics and Religion are obsolete. The time has come for Science and Spirituality. A leader or a man of action in a crisis almost always acts subconsciously and then thinks of the reasons for his action. A moment comes, which comes but rarely in history, when we step out from the old to the new, when an age ends, and when the soul of a nation, long suppressed, finds utterance. But, after all, no safeguards are adequate, unless the will to give effect to them fully is present.

Life is like a game of cards. The hand you are dealt is determinism The way you play it is free will.