10 Great Quotes By Giani Zail Singh That Shows A Lighter Side Of The Famous President Of India.

Former Editor of The Indian Express, Arun Shourie, was called to the Rashtrapati Bhavan after he had penned an article criticising the then President of India. Shourie expected to be dealt with roughly but to his utter surprise when he arrived at the President's residence he was greeted with warmth by the premiere himself. After exchanging pleasantries when they settled down, President's secretary remarked that he was supposed to take a stronger stand and admonish Shourie for publishing the piece. At this the President replied, “unko likhane deo, parhta kaun hai?” (Let them write, who bothers reading?)

Do you know who was this personality? He was the first Sikh President of India, Giani Zail Singh.

During a seminar, Singh had to deliver a speech. A pre-written script had been prepared for the occasion and Singh started reading from it. However after a few moments when he realized the audience was not interested he dropped the scripted speech and went extempore to the delight of all present.

Though he had to face the sting when Operation Bluestar commenced, Singh is also the only President who refused to sign a bill passed by both the houses of Parliament and not face a motion for impeachment. His feat is a world record that is yet to be broken. 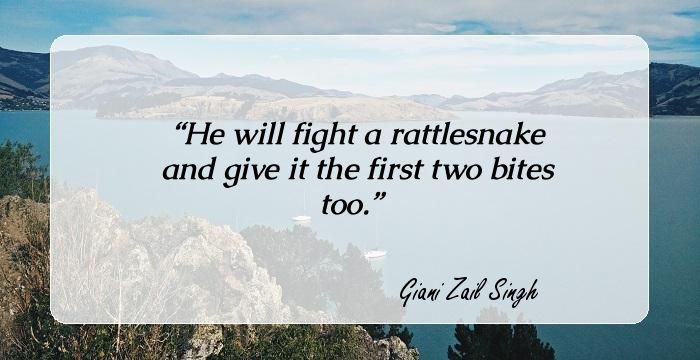 He will fight a rattlesnake and give it the first two bites too.

I am a sepoy and will follow the guidance of my leaders. 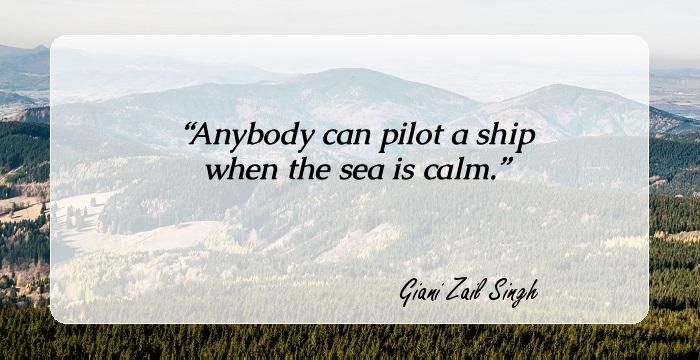 Anybody can pilot a ship when the sea is calm. Age has been the perfect fire extinguisher for flaming youth. A fallen lighthouse is more dangerous than a reef. Even a cock crows over his own dunghill. A revolutionary idea is usually one with its sleeves rolled up. Experience is like a comb that life gives you when you are bald. Beware of the naked man who offers you his shirt. After marriage, the other man92s wife looks more beautiful.