30 Inspirational Quotes By Jaswant Singh, The Indian Politician, Which Will Inspire You To Abide By The Right Always.

Jaswant Singh is a former soldier of the Indian Army, and politician from India. He began his political career with the Bharatiya Janta Party and has been in charge of several important portfolios including Finance, External Affairs and Defence.
During his tenure as the Minister of External Affairs, Singh maintained a stern attitude towards neighboring Pakistan, in the face of growing tensions between th two countries.
His stellar financial policies and market friendly reforms made him the recipient of prestigious 'Outstanding Parliamentarian Award'.
Singh has witnessed his fair share of controversies, primarily because of his rigid political beliefs.
In 2009, the politician courted controversy after the release of his book 'Jinnah: India-Partition-Independence.' His praise of separatist leader Muhammad Ali Jinnah in the book led to his expulsion from BJP, though he was readmitted later in 2010.
In 2014, when he was denied a party ticket, Singh filed nominations for the Lok Sabha parliamentary elections as an independent candidate. His refusal to withdrawal of his nomination caused his removal from the party.
The leader has been in coma after suffering from a head injury in 2014
The following segment brings to you a collection of motivational quotes by the exceptional leader.
3 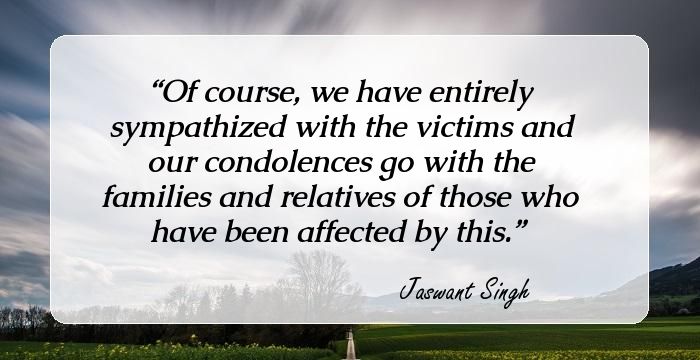 Of course, we have entirely sympathized with the victims and our condolences go with the families and relatives of those who have been affected by this. 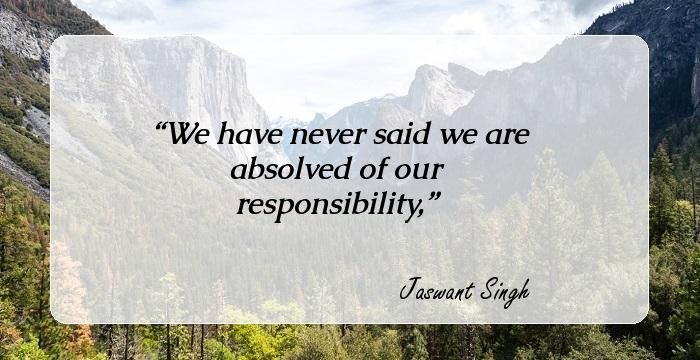 We have never said we are absolved of our responsibility, 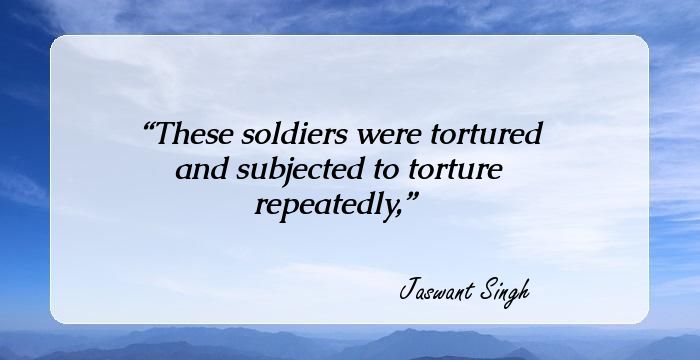 These soldiers were tortured and subjected to torture repeatedly, The government shares the anguish expressed in the motion, ... we should pass the motion unanimously and work together to meet the challenges. We do not believe that bilateral relations between India and Pakistan ought to or can be held hostage by any single issue, We will send an appropriate response through our negotiating team, When you journey by bus, you are attempting to relate to the common man and woman, We will pick up the threads from the visit of the president of Pakistan. We will increasingly endeavor to revise the vision of the relationship of peace, friendship and cooperation with Pakistan, This summit has set the tone for future relations with Pakistan, ... The caravan of peace has continued its march and on some auspicious day it will reach its destination. The government's priority remains the earliest termination of this hijacking and the earliest return of the passengers, crew and aircraft, Vigilant in our defense of democracy and constitutional government. Democracy helps countries to strengthen their identity, promotes internal cohesion and the ability to withstand pressures unleashed by globalization, But what the South has gained in the wake of these changes is not so encouraging, This was not a matter for any international initiative or intervention. Clearly, globalization is no panacea, If there was any preparation it was from India's side, Questioning it now is an ingenious attempt to find ex post justification for the intrusion. This is unacceptable. Other than sitting and talking to Pakistan, we can't do much more, The interests of the two countries (the US and India) need not converge all the time. It is saddening to note that for the first time in the history of the country the Minister for External Affairs has been asked to step down. We have appealed to the hijackers to at least let the children, along with their mothers come out of the aircraft. They have not acceded to our demand, For the sake of parity of representation between the two countries, the high commissioner of Pakistan who is currently in India will be required to returned to Islamabad, When the need arises, the two militaries can engage in dialogue through existing established channels so that the de-escalation process is properly handled, We will continue to operate with maximum restraint. We are a responsible member of the international community and we shall continue to be so, We will revert shortly to the government of Pakistan with alternative dates, Examine all options and take action at an appropriate time. Let us see what difference there is between his utterances and his actions. The United Nations does not claim intermediary or a negotiating role,