9 Inspirational Quotes By L. K. Advani The Former Deputy PM Of India, To Instill In You The Courage To Fight All Odds Without Fear.

Lal Krishna Advani is an Indian politician who is best known for laying the foundation of a brand new Bharatiya Janta Party. A hardline promulgator of Hindutva, he aimed at uniting Hindus and vehemently criticized the minority appeasement policy of Congress.
As a part of his mission to rebrand BJP he used a pro-Hindu agenda. The Ram Janm Bhoomi Andolan and Rath Yatra in the 1990s were a part of his mission.
When upon Mandal Commision's recommendation, led by V. P. Singh, the Government allowed for a 25 percent reservation for the OBC's in Government jobs, Advani used the political unrest in the country to capture the vote banks comprising mainly of Hindus.
However the resulting communal violence in the country following the Rath Yatra, drew the ire of many. Advani who began his procession from Somnath was arrested in Samastipur by RJD leader Lalu Prasad Yadav before the Rath could reach Ayodhya.
Despite being at the forefront of the party, Advani put forth the name of Atal Bihari Vajpayee for the Prime Ministerial candidate in 1995. He cited that Vajpayee was a more seasoned politician to handle matters at the center and also that he did not want to hinder the judicial proceedings in the Hawala case and Babri Masjid Demolition case against him. With BJP in power, Advani held many important portfolios including that of Deputy-PM.
The following are some of the best inspirational quotes by the famous politician L. K. Advani.
6 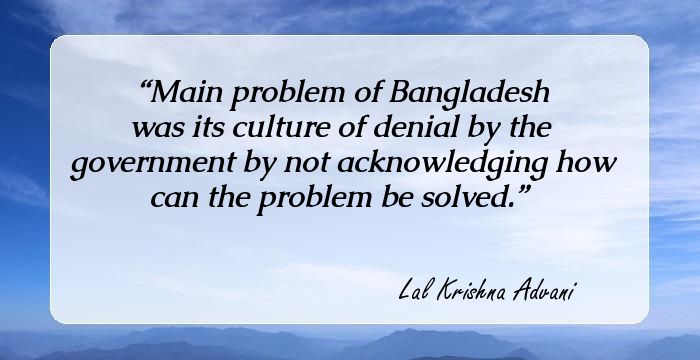 Main problem of Bangladesh was its culture of denial by the government by not acknowledging how can the problem be solved. 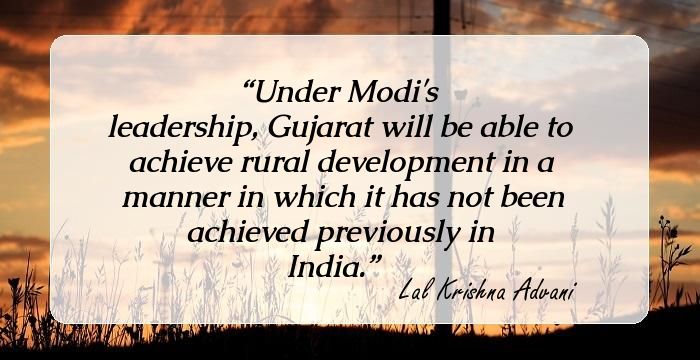 Under Modi's leadership, Gujarat will be able to achieve rural development in a manner in which it has not been achieved previously in India. 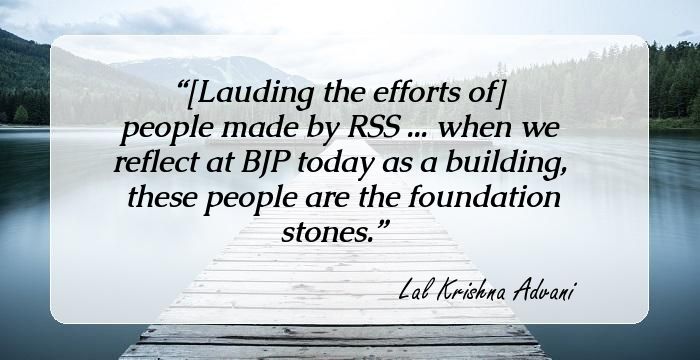 [Lauding the efforts of] people made by RSS ... when we reflect at BJP today as a building, these people are the foundation stones. Some MLAs may have personal differences. But all differences should be dealt with amicably within the party framework. The limits and boundaries (of the party) should not be crossed. However, the unrest within the party will not affect the development of the state. A bundle of untruths The whole world will praise him and all Indians will be forever indebted to him if he does. With these qualities, we can achieve revival and bounce back stronger than ever before. I had announced at the Chennai meeting of the BJP National executive that I will step down as president. I have done so.