16 Inspirational Quotes By Lalu Prasad Yadav The Former Bihar CM The Man Who Transformed The Indian Railways Into A Profit-Making Organization.

It was the year 1990 and RJD had won the state assembly elections. The party leader went to his mother to share the news and told her that he had won the polls and would be soon sworn in as the Chief Minister. At this his mother replied in an apathetic manner, “What is the big deal? You have not got a government job after all.”

Do you know who is this politician? It was none other than former Bihar CM Lalu Prasad Yadav.

The politician is known for his tongue-in-cheek remarks and leaves no chance to decimate the opposition.

Though many view him as a promulgator of caste based politics, the people of Bihar have a different opinion: “During Laluji’s rule, we used to get power for 16 hours but after Nitish became CM we get it for two hours. Power supply is only good enough to charge mobile phones. We got our identity because of Lalu Prasad. So what if he has not fulfilled several expectations, we can never desert him.”

Lalu was a supporter of Jayprakash Narayan, who led the national movement against dictatorial regime of Indira Gandhi. He was put behind bars during the Emergency and it was at that time his daughter was born. Folklore says JP himself named the girl child as Misa which was an acronym for Maintenance of Internal Security Act. 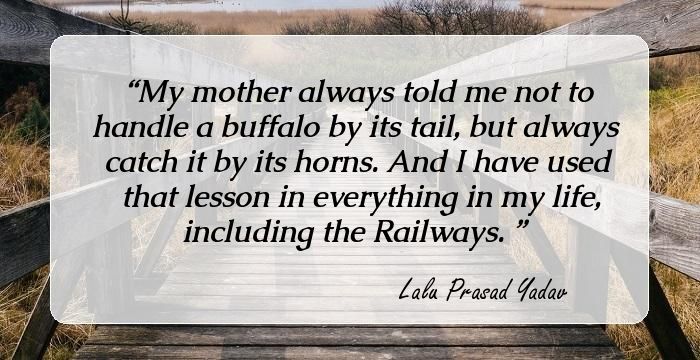 My mother always told me not to handle a buffalo by its tail, but always catch it by its horns. And I have used that lesson in everything in my life, including the Railways.Ā 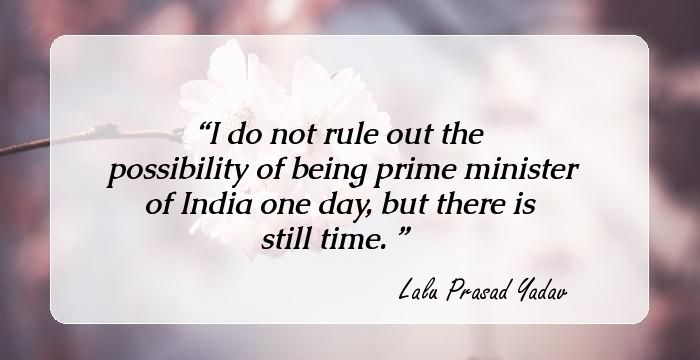 I do not rule out the possibility of being prime minister of India one day, but there is still time.Ā 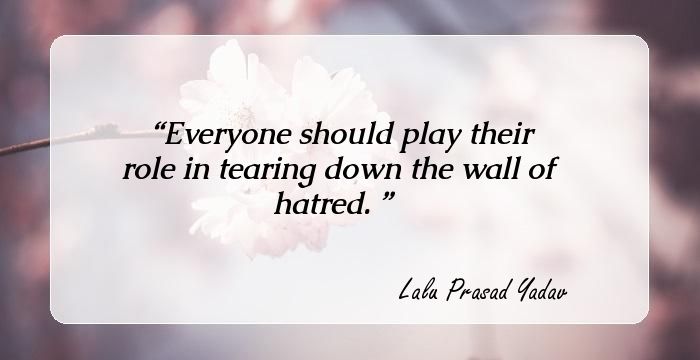 Everyone should play their role in tearing down the wall of hatred.Ā In my view, Indian Railways has immense untapped potential.Ā Our mass movement will shatter this communal, fascist and autocratic center. I work so much. If I don't get all the comforts, I will turn mad.Ā If you do not milk the cow fully, it falls sick.Ā In a democracy, power is not permanent.Ā In politics, everybody is free to choose his friends and allies.Ā It is because of me that today the union government has sanctioned special funds for the development of Bihar. The lower caste people were killed as part of a conspiracy to dismiss my party's government.Ā Today in India there are all sections of people, as the BJP realized when the poor voted them out.Ā Musharraf is a good man and wants to improve relations with India.Ā When people see how I manage to work my way out of tough situations, it gives them hope in their own life. We recognised Urdu as the second official language and made it a medium of examination in all Bihar Public Service Commission tests.Ā People all over the world want to know how the son of a cowherd has risen to such heights. Their interest in me is a victory of Indian democracy.