17 Quotes By Manmohan Singh, The Great Economist, Will Inspire You When Things Go Tough.

Manmohan Singh was the man who was the brains behind steering economic liberalization in the nation. He dispensed with these duties as the RBI Governor and as the Finance Minister. Singh was also the first person of Sikh origin to become the Prime Minister.

Throughout his tenure, Singh has been criticized for being a kingpin of the Gandhi family and turning a blind eye to corruption brewed by his party officials. However the premier's own integrity remained spotless when he walked out of the 7RCR mansion, official residence of the Prime Minister of India.

Singh is usually a man of few words and known for his calm demeanor. But the 2005 UN General Assembly was one of the rare occasions when he gave a snarky reply to the Pakistani foreign minister Khurshid Mahmud Kasuri.

Pakistani President Parvez Musharraf had visited India earlier in the same year in a bid to improve relations between the two countries. However at the General Assembly, Musharraf disapproved of India's stance towards Kashmir issue. When the delegations of the two nations encountered afterwards, Manmohan addressed Kasuri and said, “Kasuri Sahib, Ek to aap Pak-Bharat taluqaat ko improve karne ki baat karte hain, lekin doosri taraf aap khub koshish kar rahein hein Hindustan ko bahar rakhne ki UNSC se.” (You portray that you wish for the ties between the two nations to improve on one hand but on the other you do everything in your capability to ruin India's chances at being included in the United Nations Security Council.)
4 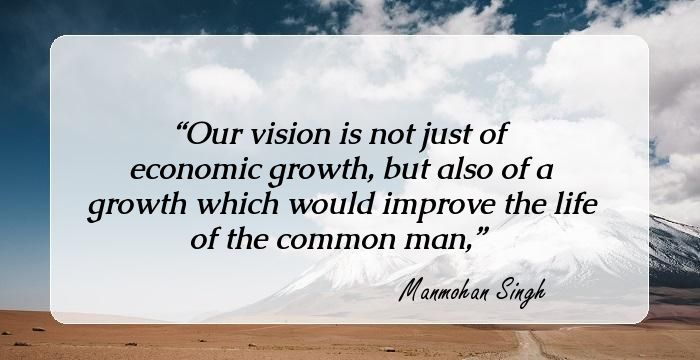 Our vision is not just of economic growth, but also of a growth which would improve the life of the common man, 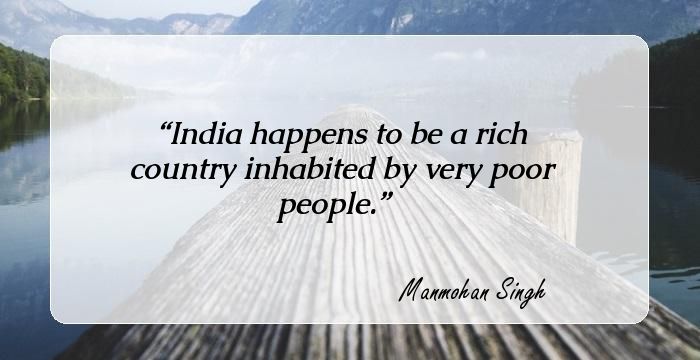 India happens to be a rich country inhabited by very poor people. 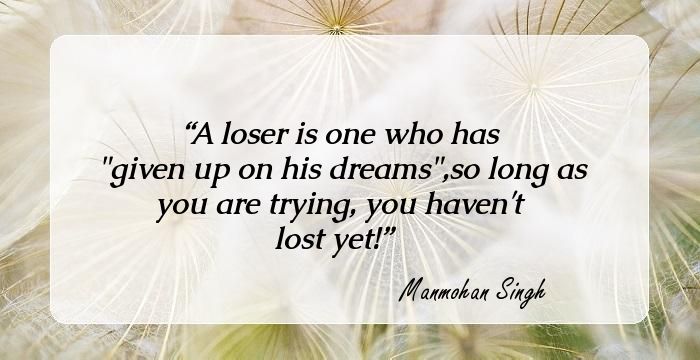 A loser is one who has "given up on his dreams",so long as you are trying, you haven't lost yet! Our foreign-exchange reserves when I took over were no more than a billion dollars; that is, roughly equal to two weeks' imports. Life is never free of contradictions. Unity and secularism will be the motto of the government. We can't afford divisive polity in India. Reform is not an event, it is an process. We will continue to push forward the cause of reform. We are a coalition government, and that limits our options in some ways. Privatization happens to be one such area. The essence of Hinduism is that the path may be different, but the goal is the same.

A loser is one who has &quotgiven up on his dreams",so long as you are trying, you haven't lost yet! It is a struggle for the minds of the people... No cause justifies recourse to terrorism. Once this is completed, we will be able to address a major constraint affecting our economy, I can assure you we are a responsible nuclear power. Nobody should be allowed to tinker with democracy. We will not discontinue the good works of the past government. I do not believe that I am a weak prime minister. That is is for the historians to judge. From the beginning, as a thinking student of 15, 16 years ago, I was troubled by the grim poverty that I saw around me. There seems to be some success in our search for peace and harmony now,