12 Wise Quotes By Shaheed Bhagat Singh That Will Instill In You A Sense Of Patriotism.

A 11-year-old boy heard about the Jallianwala Bagh massacre that occurred on April 13, 1919. On the ill-fated day Colonel Reginald Dyer ordered his troops to fire over innocent pilgrims gathered in the public ground. The young lad witnessed the aftermath of the shootings, corpses littered everywhere and the soil drenched in the blood of innocent. Furious and shocked the kid wailed. It was then that he swore upon the deceased that he shall free his motherland from the clutches of Britishers. He took home a bottle filled with blood soaked mud and performed a religious ritual. When his sister enquired he replied, "This is pure blood of great freedom fighters killed by the British. I'm paying my last tribute to them who fought to make my India a free land." Do you know who was this little boy? He was none other than Shaheed Bhagat Singh.

Shaheed who killed two British police officers Saunders and Scot and then used a handmade bomb to attack the assembly, where a bill for handling more powers to the police was supposed to be passed. The incident caused much hype in the media and inspired the youth to participate in the freedom struggle. Bhagat Singh was finally executed with his accomplices Sukhdev and Jai Rajguru and they happily sacrificed their life for a greater cause. 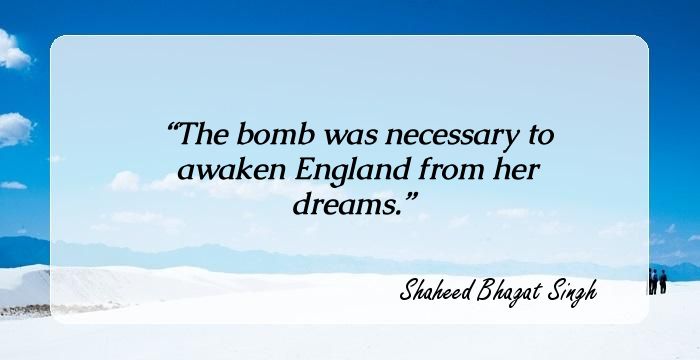 The bomb was necessary to awaken England from her dreams. 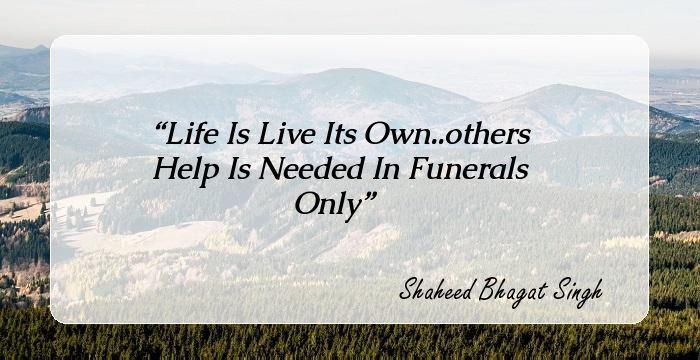 LIFE IS LIVE ITS OWN..OTHERS HELP IS NEEDED IN FUNERALS ONLY 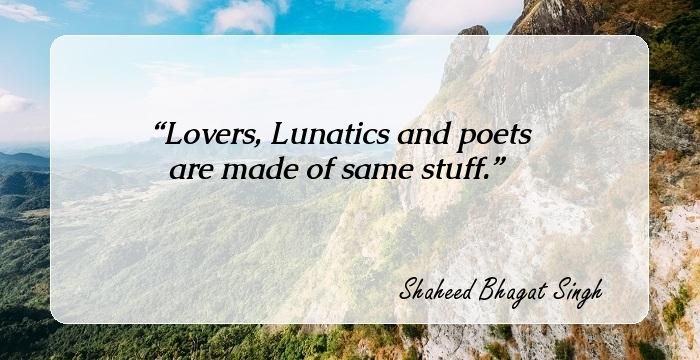 Lovers, Lunatics and poets are made of same stuff. If the deaf are to hear, the sound has to be very loud. Non-violence is backed by the theory of soul-force in which suffering is courted in the hope of ultimately winning over the opponent. Bombs and pistols do not make a revolution. The sword of revolution is sharpened on the whetting-stone of ideas. The elimination of force at all costs is Utopian Every tiny molecule of Ash is in motion with my heat I am such a Lunatic that I am free even in Jail. One should not interpret the word 93Revolution94 in its literal sense. Various meanings and significances are attributed to this word, according to the interests of those who use or misuse it. Any man who stands for progress has to criticize, disbelieve and challenge every item of the old faith. Revolution did not necessarily involve sanguinary strife. It was not a cult of bomb and pistol. The sword of revolution is sharpened on the whetting stone of ideas-bhagat singh in court during his trial, india's struggle for freedom