14 Inspirational Quotes By Netaji Subash Chandra Bose That Will Make You Believe No Obstacle Is Too Big If You Want To Achieve Your Goals.

Subash Chandra Bose was a Indian politician who spearheaded the armed revolution against the British. He organized the Indian Legion to free the nation from the clutches of foreign rule. He tried to make allies of Britain's foe and in his quest he even met the great dictator Adolf Hitler.

Bose was received by Hitler's staff as the Fuhrer was busy and he was asked to wait. The Indian patriot did as asked and began reading a newspaper. After a while Hitler emerged form one of the rooms and passed by Netaji without acknowledging him. Unfazed Bose also continued reading.

A few moments later Hitler passed by again, this time too without glancing towards the visitor and Subash's reaction was also the same. The masquerade continued for a few more times and each time Subash would remain unperturbed. Finally Hitler came from behind Netaji and placed a hand on his shoulder. At this he looked up from the newspaper and addressed the German leader by his name. A little surprised, Hitler asked him "How can you be so sure?" Netaji replied, "No one except the Real Hitler has the audacity to place his arms on my shoulders."

The Fuhrer employed several look-alikes of him to keep his enemies confused, but the real one could not remain hidden from Netaji's vigilant eyes. 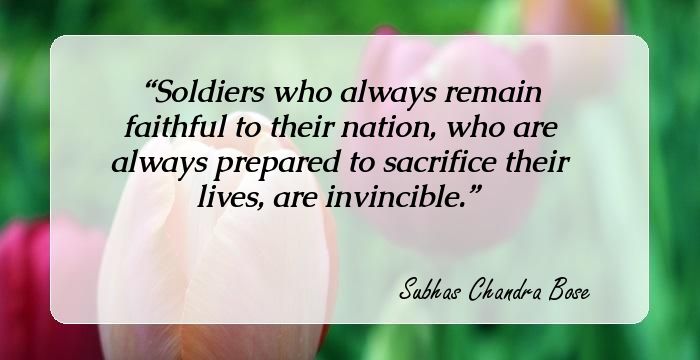 Soldiers who always remain faithful to their nation, who are always prepared to sacrifice their lives, are invincible. 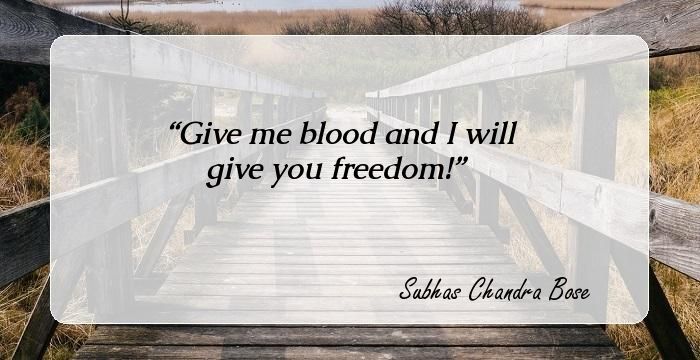 Give me blood and I will give you freedom! 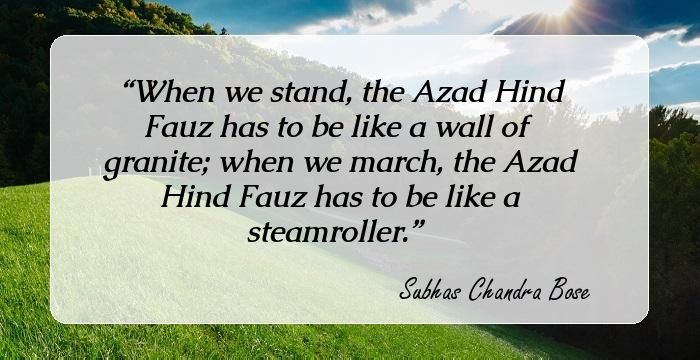 Nationalism is inspired by the highest ideals of the human race, satyam [the truth], shivam [the God], sundaram [the beautiful].‚Äô Remember that the greatest crime is to compromise with injustice and wrong. It is only on the basis of undiluted Nationalism and of perfect justice and impartiality that the Indian Army of Liberation can be built up. Forget not that the grossest crime is to compromise with injustice and wrong. Remember the eternal law: you must give, if you want to get. No real change in history has ever been achieved by discussions. One individual may die for an idea, but that idea will, after his death, incarnate itself in a thousand lives. You give me your blood and I will give you Independence! For an enslaved people, there can be no greater pride, no higher honour, than to be the first soldier in the army of liberation. The secret of political bargaining is to look more strong than what you really are. Freedom is not given - it is taken.