19 Motivational Quotes By Yashwant Sinha, Former Finance Minister Of India, That Will Help You Realize The Importance Of Hard Work.

Yashwant Sinha is an Indian politician who has occupied the portfolios of finance ministry and ministry of external affairs. At one point of time he was known as the Rollback Finance Minister, for his preposterous handling of the June 1998 budget which had to be rolled back the same day it was announced. However his journey from there to being named as the Finance Minister even before NDA gathered to decide the names of other ministers after winning the elections in 1999 speaks volumes of his talent.
Testifying to the fact that Yashwant Sinha was a quick learner on th ejob, a close aide confided that, "In the first few months most proposals needed to be explained at length to the minister.
But by now he is as knowledgeable on matters of finance as his two predecessors, and often lends his insights into plans."
Even industry veteran Sunil Bhandare agrees, "Sinha's grasp on matters of finance and industry has been quick and firm."
If these testimonials are not proof enough the market-friendly and growth-inducing policies he introduced in the budget of 1999 will certainly bury the hatchet of doubts for once and for all.
Here are a few pearls of wisdom from one of the finest political minds the country has ever seen.
10 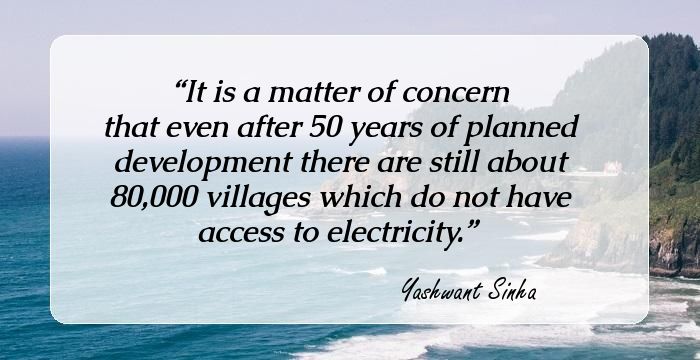 It is a matter of concern that even after 50 years of planned development there are still about 80,000 villages which do not have access to electricity. 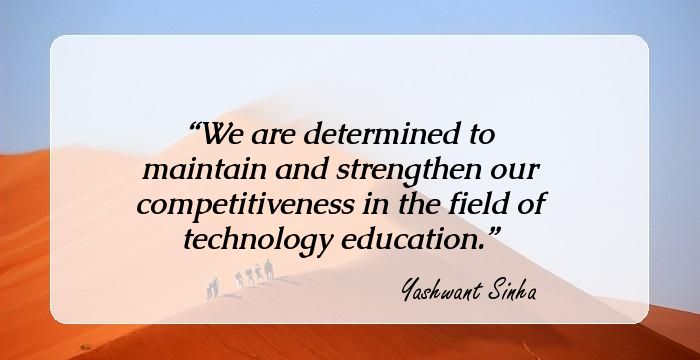 We are determined to maintain and strengthen our competitiveness in the field of technology education. 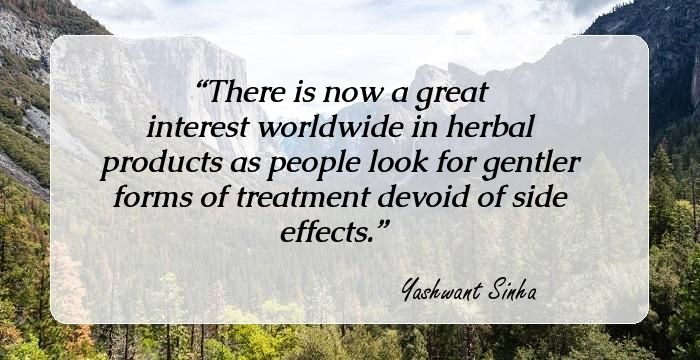 There is now a great interest worldwide in herbal products as people look for gentler forms of treatment devoid of side effects. Journalists have to increasingly take greater risks in covering terrorist and other violence prone incidents. I am deeply conscious of the burden being placed on future generations by our extravagance. I cannot allow this situation to continue. Growth is not just an end in itself. It is the critical vehicle for increasing employment and raising the living standards of our people, especially the poor. Barring some significant but scattered achievements, we are not a major force in the international sports arena. Investment in human resources is an essential precursor for sustainable economic development. Customs is not all about raising revenues. It is also a powerful tool for building our industrial capabilities and improving our international competitiveness. Despite all challenges, my job as a finance minister in making a budget is easier than that of an average housewife struggling to balance the family budget. Today, we must squarely confront and overcome the critical challenge posed by a weakening fiscal situation. There is no room for complacency. The challenges before us, both international and domestic, remain grave. It is my earnest desire to make the system of tax collection as user-friendly and efficient as possible. It has been just ten weeks since this government took office but we already know that a new India is rising. There were very few leaders of his dynamism, energy and of his presence. The veil is off. India is now firmly in the US camp. India and China are too large and too strong to be tamed or intimidated - even by the other side.